Plan Your Historic Portland Car Dealer Tour with Our Map

Please read each description as it will indicate if the business is still in operation as a dealership or if it has long since closed it's doors. You should be able to zoom in on the map, find directions from your home to the various locations pictured and all the other stuff maps do well these days. Also, as a disclaimer, please note that we cannot be responsible for your route or accuracy of the map so please do not cover your windshield with a tarp and blindly follow the map to your destination.

Will the Next Lamborghini be Designed by an Iranian College Student?

Sajjad Soleymani builds cars, awesome cars... like the one pictured above. He's a designer not in steel or carbon fiber, but in vectors and digital layers. The car up top isn't real, it just computer graphics, but it could be right?

Sajjad says that when he was just three or four years old he began designing things, "but not with drawing, by making! Making things by rubbish all around our house, in streets, anywhere."  He started out of necessity remarking that his family had few toys for him to play with so he had to build toys from scrap materials including says Sajjad, "cars, bikes and even robots!" He learned that drawing his designs on paper takes less time than making them in three dimensions and decided college offered the promise that he could turn his gift for creative play into a lifelong career. The 19-tear old left home from Iran's second largest city, Mashhad, to seek his fortune and glory at the University of Tehran, College of Fine Arts.

While in college he made yet more revelations about himself,  understanding for the first time how wildly different his work was from that of his peers. "From there I learned my forms are not like any others, my friends call my forms Sajjadism. You can see them on my cars, planes, cutlery sets, even perfume bottles." He's not being immodest, It's true, at such a young age he has established his own identifiable design language, something many designers take a lifetime to gain.

I don't know about you, but I would slide naked down a firehouse pole wrapped with 40 grit sandpaper if it meant I got to see his cyborg zombie Volvo semi trailers on the highways of America. Hang a goblin head on the front and you're ready for a Maximum Overdrive remake.

In our exchange, Sajaad's enthusiasm came through clearly. He has a true passion for not only the art of the aesthetic but also a genuine love of cars. We hope there will be many more articles about Sajjad's work in the years to come. You can keep up with his designs on his page here: Coroflot Sajjad Soleymani


Pope Benedict XOXOEpisodeVTheEmpireStrikesBack XVI just received his brand spankin' new Benzo in the form of the familiar Popemobile. Recent Popes (Popi?) have traditionally made public appearances from within the armored confines of either a Mercedes-Benz ML or G-class specially outfitted for the purpose of securely displaying the guy with the big hat to his humbled masses, and also the occasional guy who tries to murder him.


The new vehicle relies heavily on the tried and true formula of an all white body and interior with vast expanses of bullet-resistant glass (transparent armor in industry lingo) and a specially prepared seat that can raise the Pope higher up to become more visible. Considering that the current Holy See is 85-years old we can also imagine there are special controls to alert the driver that "it's too cold back here" or "you're driving way too fast!" in the spirit of a frisky Mrs. Daisy from the popular film. 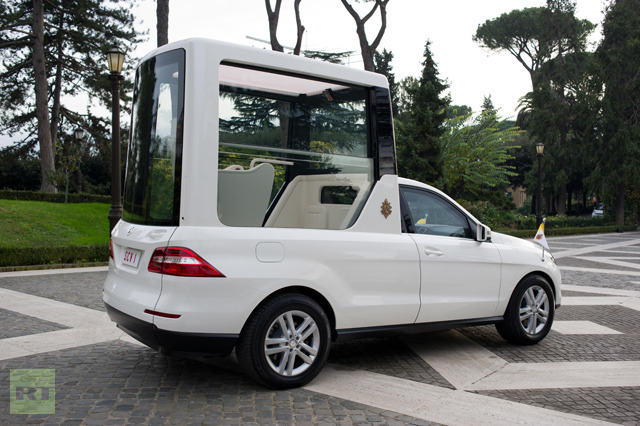 If his own closest advisers are to be believed, this new vehicle arrived just in the nick of time.