Elon Musk's Flamethrower is a Roofing Torch in Cosplay Disguise

Elon Musk's Flamethrower is a Roofing Torch in Cosplay Disguise

Elon Musk only just announced the ability to preorder a very Star Wars-looking flamethrower as a promotional gadget for his Boring Company tunnel-building venture, and so far the news has been aflutter with how many units have been sold (8,000 units), the value of those units ($4-million+), and how one California politician is already working to institute a ban on the gadgets.

One thing that seems overlooked so far is determining what exactly these things are? Is this a true "flamethrower" in the traditional sense or a rich-guy plaything to purchase on a whim? The answer is both, and not both at the same time. It is technically a flamethrower of course because it.... ummm... throws flames, BUT, the ATF generally defines a flamethrower as a device that can shoot a flame over 10-feet and regulates such devices as weapons. This one only forces a flame out about 1-4 feet if we base our judgement on Elon Musk's own Instagram posts showing him playing with the device in the corridors of one of his companies (possibly Space-X given the large Earth and Mars images that dominate the wall behind him). 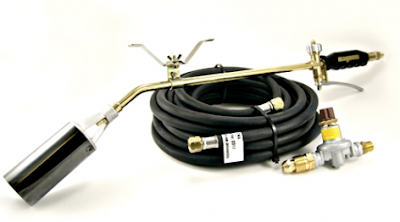 What these devices appear to be in actuality are roofing torches used to heat and lay down tar and other roofing materials by heating them enough so they adhere in all temperatures, but outfitted with a specially-built shell that gives them the appearance of futuristic assault weapons. (Interestingly, this is also what the propmakers of Starship Troopers did to achieve their Morita Assault Rifle, they simply built fiberglass hard-cases that fit right over a functioning factory stock Ruger Mini 1.)

While roofing torches can be had for as little as $30 for your bog-standard Harbor Freight Death Inducer™, tho really pro-level units cost upwards of $400, so you can see that the markups involved in creating these fire-puking gadgets isn't really too severe when you consider the uniqueness of the item and the fact that some people pay far more than the $500 asking price on replica light sabres that, let me remind you, do not have the ability to burn a hole through your boss' office wall.