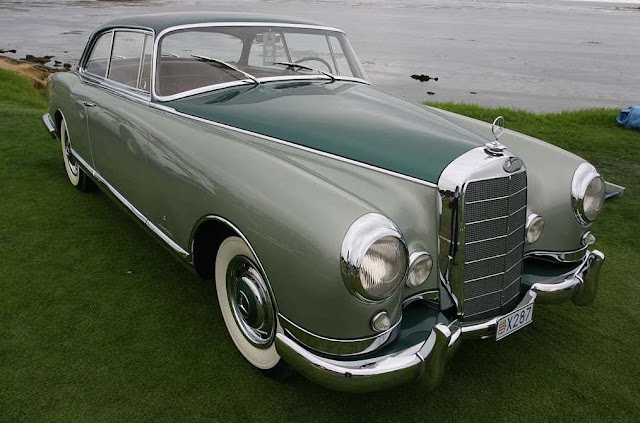 As the saying goes, “Beauty is in the eye of the beholder.” This Italian Mercedes-Benz- bodied 1955 Mercedes-Benz 300b Coupe has always been the object of mixed opinions, it’s styling far more contemporary than any other luxury car that Mercedes-Benz offered in 1955.

The 300s were DBAG’s luxury flagships in the Eisenhower years, With flowing fenders and dignified Sindelfingen coachwork influenced by pre-war tradition. This Pininfarina bodied 300b, built in 1955, forecast the look that Mercedes-Benz adopted when the 220S Coupe was introduced for 1957.
The styling of this 300b Pininfarina Coupe has been interpreted as a blend of several cars of the period, particularly the Bentley Continental, in profile, and the Facel Vega, from the rear. Pininfarina also bodied a few other 300S models but not as attractively as this one.

Company History
The Carrozzeria Pininfarina, one of Italy’s oldest and most admired design houses, was established by Batista Pinin Farina in 1930. From humble beginnings the firm specialized in design and construction of prototype and limited editions. In Iess than a decade Pinin Farina became one of the most respected coach builders in Europe. By 1939 the factory was producing one car daily and employed more than 500 workers. 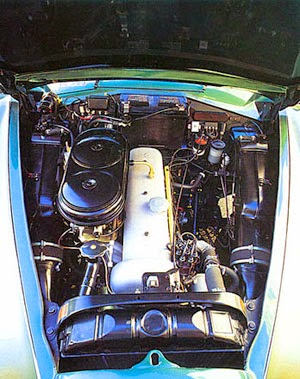 A few years ago, Sergio Pininfarina, who succeeded his father as head of the firm in 1966, recalled that Pininfarina became famous because its prototypes were exhibited at all important motor shows throughout Europe. “This brought us private commissions to duplicate the prototype designs. My father believed that a car produced in a certain quantity was better than a one-off example.”
Sergio Pininfarina, (the family surname was Farina, and “Pinin” the father’s nickname. The business was Pinin Farina until 1961, when both family and company name were changed to Pininfarina), told us that prototype production was his father’s greatest ambition. “In a one-off car, you can reach a higher degree of finish,” he says, adding that building duplicates allowed the company to put its designs into the hands of many influential people.

In the 1950’s we began working with all the automobile manufacturers, not only in Italy but in Europe with Peugeot, in England with British Leyland, and with several Japanese firms.” Pininfarina noted that his father was the first Italian to design an American-built car, the Nash Ambassador. “The success of that car in America had a great effect in Italy, because here a success in a foreign country is highly regarded. We had these successes with many foreign automakers. We estimate that there are more than 25 million automobiles today with the Pininfarina name.” The number of Pininfarina-bodied Mercedes-Benz cars is considerably lower. Only three were designed and built in 1955 and 1956, each with a distinctively different body.

Styling Stages
This 300 was “dressed-up” in four stages, as documented by photographs before it was sold in 1956. Stage one, as the car was originally shown, used virtually no chrome trim except in the mandatory places like the radiator shell, bumpers, wheel and window trim.Even the headlamp bezels were painted. In stage two the bezels were all chrome, the only noted change.Stage three saw the addition of well-placed lower side molding, flat chrome bands around the front of the fenders, and extended chrome fairings on the auxiliary lamps. In its fourth stage, the car was displayed in Europe, and in this final version it appears today, with wheel well moldings and another belt molding to facilitate two-toning the hood and deck. This molding also bridges the gap in height between the bottom edge of the hood and the bottom of the pre-existing belt molding, occurring via a “hop-up” at the trailing corner of the hood. 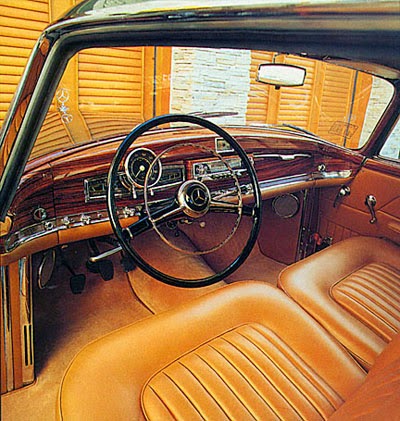 Records indicate that it was not until Sindelfingen received and approved Pininfarina’s drawings that an automobile was delivered. Whether a complete car or just a running chassis was sent to Pininfarina is unclear. During an extensive restoration of this car, workers discovered a body identification tag with an assigned number under the left front kick panel (upholstery) on a structure manufactured by Sindelfingen. The tag number, 186.010 450005, indicated a 1954 300b sedan. DBAG records show that the car was sold to F.A. Saporiti, the Mercedes-Benz dealer in Milan, on January 17th, 1955, and shipped by rail to Turin. Saporiti then delivered it to Pininfarina for the new body. The November 1955 issue of Road & Track carries a photograph of this car on page 34 under the heading “New…From Italy.” The car was also pictured in international publications including Industria Automobilistica Italiana, 1957, and Automobil Revue, published in June 1955.

Rejuvenation
In 1956 the car underwent several exterior changes, mostly additional chrome moldings and a more defined two-tone paint scheme. After the European shows, it was sold and did not resurface until mid 1972, when opera singer Roland Dutro in Wiesbaden, Germany, wrote Pininfarina requesting body crests to put on the car following an accident. Two years later it was sold and found its way to America. Present owner Fred Kriz, Los Angeles Section, purchased it after it was discovered in the San Joaquin Valley as “an old clunker.” In August 1992 a lengthy restoration was completed by Scott Restorations, and the car was subsequently invited to the Pebble Beach Concours d’Elegance, where it was judged best in class. 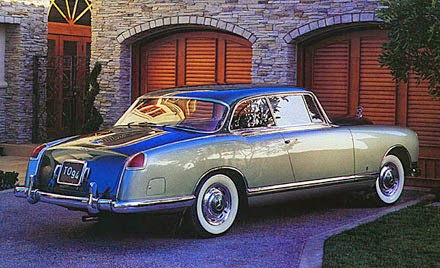 The distinctive styling is best viewed in profile. The sleek fender line draws your eye back to the modest kick-up forward of the C-pillar and the triple chrome molding accenting the greenhouse. Minor features include small trafficator turn signal lamps at the base of the C-pillars and two rear window wipers.

Whether or not you find this singular Coupe attractive, it is significant, providing a look back at the end of an era when the three-pointed star could be found atop the grille of a coachbuilt car.

Thanks to Stephan Cobos and David Grant of Scott Restorations for assistance with this article. As well as letters from Pininfarina, references from Mercedes-Benz, and notes from Bob Doehlar, these sources were used: Pininfarina, Architect of Cars by Michael Frostick, The Mercedes-Benz Since 1945, Vol. 1 by James Taylor, Road & Track, November 1955, and Mercedes-Benz Personenwagen by Werner Oswald.

Photographs by Dennis Adler
First published at, and used by kind permission of, scottgrundfor.com