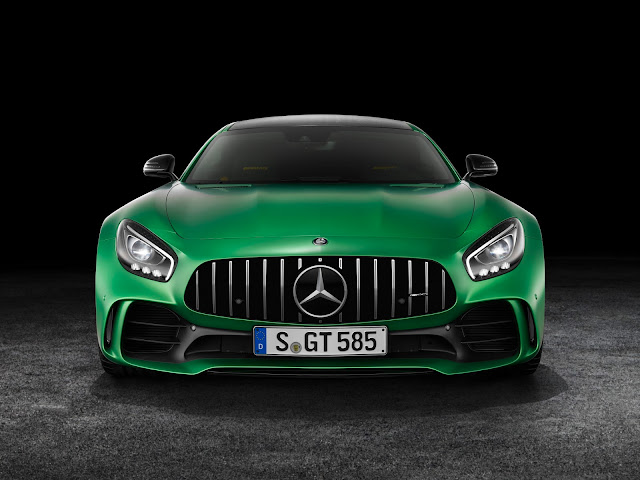 You asked for more industry "behind the scenes" articles so we're gonna' keep tossing press releases and photos your way. Today we feature the Mercedes-Benz AMG GT-R. Enjoy! 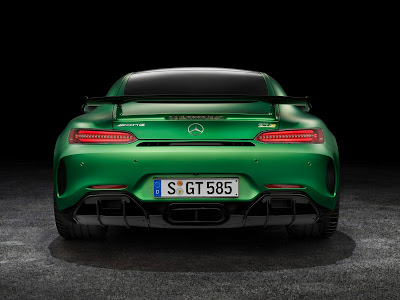 The new Mercedes-AMG GT R
Developed in the "Green Hell" 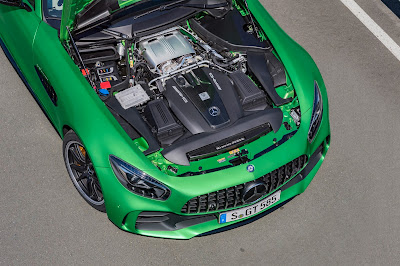 June 24, 2016 -Affalterbach.
From the world's most demanding racetrack directly onto the road: Never before has Mercedes-AMG packed so much motorsport technology into a production vehicle than into the new AMG GT R. The front-mid-engine concept with a transaxle, V8 Biturbo engine rated at 577 hp, extensively modified suspension, new aerodynamics and intelligent lightweight construction laid the foundation for an especially dynamic driving experience. Even from afar, the exclusive "AMG green hell magno" special paintwork leaves no doubt as to the sports car's origin, having spent most of its development time in the "Green Hell" of the Nurburgring racetrack. Wider front and rear fenders allow an increased track width for optimum grip and even higher cornering speeds. A new front fascia with active elements, a large rear aerofoil and a new rear fascia with double diffuser enhance aerodynamic efficiency and help ensure optimum grip. The lightweight forged wheels equipped with cup tires as standard are likewise designed for maximum driving dynamics. The same applies to other new features such as active rear-wheel steering, nine-way adjustable traction control system and adjustable coil-over suspension with additional electronic control. Further, the new AMG Panamericana grille emphasizes the unique standing of the AMG GT R. Its characteristic form with vertical fins celebrated its world premiere on the Mercedes-AMG GT3 customer-sport racing car and now, for the first time, appears on an AMG production vehicle.

Click below to see the rest of the press release and photos:


Portland, Oregon Calendar of Automotive Events for Summer/Fall 2016
By Marrs

Cars & Coffee
Weekly, 2016
Weekly gathering of elite and unique vehicles at the World of Speed Museum just south of Portland in Wilsonville, OR. Some weeks have a featured marque or other theme.

Portland Vintage Racing Festival (previously: Portland Historic Races)
July 8-10, 2016
One of the finest motoring events in the Oregon, this show has over 200 vintage race cars competing on the track in various classes, with hundreds of show cars on display, and many more automotive gems to be spotted in the parking lot. The event features a weekend full of vintage racing, Car Corrals from various area clubs, an art contest, food, kids area, vendors, parade of show cars, Land-Rover off road experience, and a slalom course that anyone may participate in.

Forest Grove Concours d'Elegance
July 17th, 2016
The top-shelf experience for anyone with a passion for automobiles in the Pacific Northwest. Whether your interest is purely mechanical, or lies in the appreciation of the slender lines of a bygone era, families can enjoy a day spent among the cool shaded lawn of Pacific University while communing with old and new friends alike, all who share your passion for elegant motorcars. A vineyard tour is available to previous day, Saturday, July 16th.

Monte Shelton Northwest Classic Rally
July 28-31, 2016
An extended weekend rally/road tour for pre-1981 vehicles roaming the beautiful Oregon countryside in this beloved regional event, sponsored by the Alfa Romeo club. The rally website says, "Each year the Northwest Classic Rally visits a wonderful resort where we end Friday’s and Saturday’s rallying and touring with social activities including optional car washing, general tire-kicking and banquet dinners, and we conclude the event on Sunday morning with the Awards Brunch."

Rose Cup Races
July 29-31, 2016
Oldest race event West of the Mississippi and one of the first major track events at PIR. Part of the city's Rose Festival events, and held at a public park (yup, PIR is a city park!), this always signals the start of the hardcore summer racing season. Rose Cup Races on Facebook.

Columbia River Concours d'Elegance
August 7, 2016  EVENT CANCELLED
The official website states, "The Trust and Concours Committee have been unable to secure enough support in the community to underwrite the cost of producing the event." We have never had success in receiving a reply to our requests for information & press kits for previous year's events, and thus, have been unable to assist in the promotion of this event or cover it for publication.

Adult Soapbox Derby
August (Date to be determined)
An annual event that features homebuilt, and incredibly creative, soapbox racers of all types and themes that compete in a series of heats to crown one team the Adult Soapbox Champions of Portland! Mt. Tabor is the setting for this event that feels like the city's biggest neighborhood BBQ with camaraderie and good times for attendees, food, beer and some souvenirs available for purchase.

All British Field Meet (ABFM) and SOVREN Races
September 2-4
If you like a Triumph Stag as much as a dark ale, or a Bentley 3.5 litre gets your knickers in a tizzy, then this is the show for you. 800+ British cars gather at PIR for what has to be the most laid back and utterly enjoyable show of the season. Wind down the summer with racing, cars on display, food and all around good times. The featured marque this Labor Day Weekend is Land Rover.