This compilation of classic Mercedes-Benz crash tests is pretty interesting, but also shows us that some folks in the company during the 1950's and 60's were as fearless as they come. Take, for example, the two gentlemen who are testing airbags at the 0:35 mark who suffer nothing more than askewed glasses followed by a subdued moment of quiet reflection. We also really like the rocket propelled test car that gets fired into the side of a bus... possibly just for the hell of it.

Bored at Work, Have 3-Minutes?


If you have nothing better to do, this short compilation of stunts, dare devils and crashes from the 1940's is interesting break in the monotony and also illustrates two things:

And the Award for the World's Smallest Firetruck Goes To...


The fire department in Nobleton, Ontario, Canada seems to have quite the sense of humor after creating this rascal of a firetruck. What appears to be the world's smallest firefighting vehicle is actually, as explained in the comments by the fireman who was driving, "an old people﻿ mover golf cart converted to a fire truck. It is used for parades to drive Sparky around and to drive little kids around making them feel like they are in a real truck."  He puts us all at ease by reassuring, "It is NOT a brush fire truck and will never be used to fight an actual fire."

Apparently it is popular with the neighborhood kids, and the fire crew decided to take it out on this particular expedition after a group of parents walking by the station noticed the odd little vehicle and requested they bring it out to show their kids playing just down the street.


You know the feeling you get driving past an accident scene, you don't want to be morbid but you just have to look? Don't feel bad, it's human nature and we all do it, so go ahead and treat your dark side by visiting one of the most entertaining sites we've seen in a while, RicedExotics.com

You can treat yourself to everything from Burberry plaid wrapped Maserati Quattroportes to Swarovski bedazzled Benzes to failed custom jobs abandoned halfway through, such as the XJ6 pickup truck featured on their front page. The site sometimes makes errors about what was actually original equipment on some supercars, but that speaks more to the designers of the motoring exercises in excess than anything else. You can select from the list of exotics on the left side and indulge, but be warned, you may want to keep a waste can next to your computer just as you would if suffering through the stomach flu.


If you enjoyed yesterday's Big Ass Engine, then here's the other extreme, it's claimed by the builder to be the World's Smallest Running V8. There is a lot of craftsmanship here, a bit of good ol' American competitive spirit since he says in the narration it was built to outdo the previously-claimed World's Smallest V8.

We think it's a thing of beauty, and clearly a labor of love. Check out mark 3:40 to hear it start up and 4:45 to hear him get on the gas. Too bad he doesn't offer these as kits, our apartment neighbors would never get any sleep.


This ground shaking, bone rattling engine, technically a 1936 Fairbanks Morse Model 32E14, sounds like a techno DJ at the climax of his nightclub set. One of the operators even busts out a little dance move at 5:40 mark. Drop some acid and enjoy the melodic sounds of DJ Big Ass Engine!

This example, incorrectly identified as a 32D in the video, is located at the Mennonite Heritage Museum in Grant's Pass, Oregon tho we could not find information on this venue online. Many of you already know Grant's Pass as the home of the crazy but loveable Blastolene Brothers. This beast was used to power irrigation equipment before being donated to the museum.


Barcelona, Spain - Minutes after driver Pastor Maldonado won the Spanish Grand Prix on Sunday,  his team Williams garage was engulfed in flames, injuring 31 with 7 hospitalized for burns and smoke inhalation injuries. Additionally, 4 Caterham team members were among those taken to the Catalunya Circuit medical center to betreated. The blaze broke out after Maldonado and the team had took the victory photo in front of the team garage with members of various other nearby teams rushing to assist.

"The FIA is collaborating closely with the Spanish authorities investigating this incident," FIA said.
Frank Williams, team owner and wheelchair-bound paraplegic, was escorted to safety and avoided injury.

Williams driver Bruno Senna's car was reportedly destroyed in the blaze, while Maldonado's car was still in winner's circle and avoided any damage. 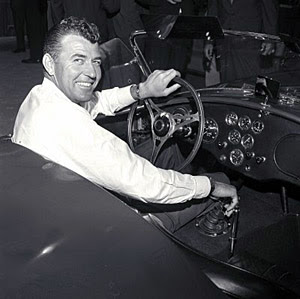 Carroll Shelby, racing driver, chili pro and mastermind behind the Cobra and Daytona Cobra Coupe among other ventures died of undisclosed causes Thursday night at a hospital in Dallas, TX near his home. Shelby received a kidney transplant in 1996 and a heart transplant in 1990. His heart condition was long-standing and he even competed in the 1959 LeMans with nitroglycerin pills held beneath his tongue. If Jalopnik's presumption is to believed, it is possible the great motor master died because he just loved those "big ol titties."

We could write a book here about the man and his accomplishments, but most of you already know him for one, the other, or a dozen of them, so we'll just say thanks for the ride and Godspeed.