GLK Gets the Same Faclift as Many of it's Owners 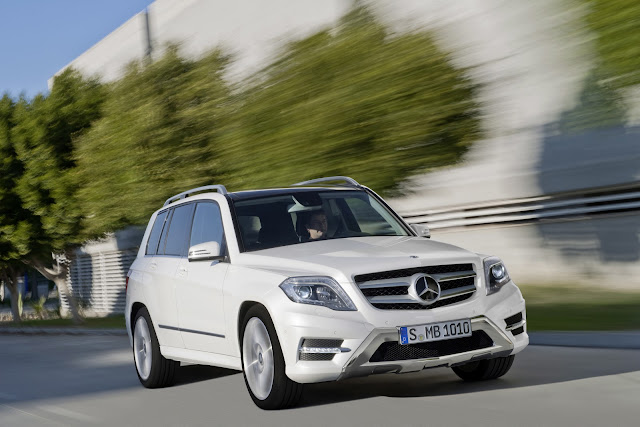 The GLK will be getting a rather successful facelift for the 2013 model year, it goes a long way to differentiate what some criticized as it's Honda Pilot-esque guise that may have hampered enthusiasm for the small SUV in the past. With more aggressive headlights matured for the requisite daytime running lights, we are excited to start seeing this baby-G on the roads. It's not just the front end that benefits from the studious eyes of Mercedes-Benz designers, there are actually over 1,000 new parts in the updated model. The coveted diesel BlueTEC option will make it's debut in the model range, appearing in the GLK250 that will appear in dealer showrooms in early 2013, while the standard gasser GLK350 will preempt it by a few months, showing up this summer. 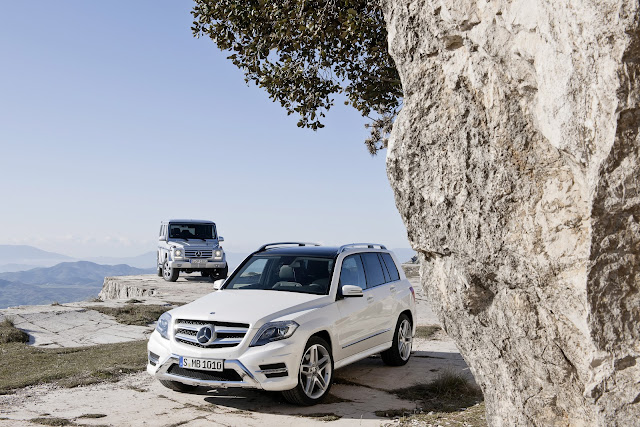 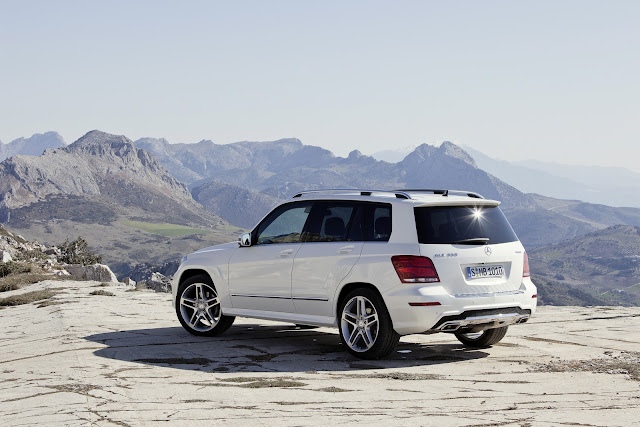 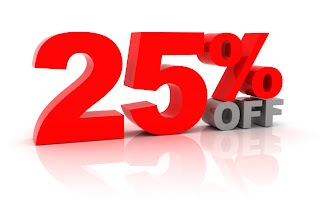 Mercedes-Benz is but the latest in a line of automakers who have resorted to seriously discounting their vehicles for sale in mainland China, now by as much as 25% off. That's better than WalMart cheap people, we're talking outlet mall deals here. BMW and Audi have respectively discounted their flagship 7-series and A8 models by 20%, but market experts believe this may only be the beginning of such price cutting moves. Most of the German brands have already been discounting entry-level models for months before including the top-shelf cars more recently. The decline in interest in luxury vehicles is presumed to be caused by both a leveling off of economic growth in China as well as simple mathematics, everyone who could afford the pricey vehicles now already have them so the market is simply drying up. We always pondered the oddly dismissive remarks made by the Teutonic executives who almost couldn't contain their readiness to bow down before their Chinese overlords, or more appropriately, their presumed infinite stockpiles of Yuan. Consider the fateful statement from April of last year by Klaus Maier, President and CEO of Mercedes-Benz (China) Ltd. "We need to make a heavy effort here, make China our top focus, since it will become Mercedes' largest market." Ooops.

Sales forecasts in Europe is not quite as dismal for 2012, albeit shrinking as compared to previous years, contrasting this with US projections that show an increase in interest and sales of luxury vehicles from Mercedes-Benz, Audi, BMW and Lexus due to a strengthening economic outlook and the return to work for many individuals who were holding off on new car purchases until their financial situations were better resolved. It seems drunk Midwesterners may have said it best, "USA! USA! USA!"

We can't help but wonder if any of this could have something to do with the depletion of perceived brand "cache" for foreign luxo-barges considering China has shown zero interest in cracking down on so-close-as-to-basically-be-counterfeit cars such as those shown below, all Chinese knockoffs with no relation to their more famous/safe originals. Kinda gross eh?

The Need to Punch Yourself in the Groin


Words rarely escape us, but when we happened across a pitch-perfect description of one of the most admired/costly/coveted cars the world has ever known, we decided to just let the literary picture painted by Automobile Magazine's Jason Cammisa do all the talking.

Read the article here: Oh Lord Won't You Buy Me a Gullwing

The (Wedding) Ring of Fire


We here at MotoArigato would like to congratulate our extended family and co-conspirators, the Woottons, on the marriage of their talented daughter Scarlett on the occasion of her recent wedding in Nashville, TN. Scarlett is the daughter of Bob Wootton, Johnny Cash's guitarist, back-up vocalist and movie/TV stand-in since the Live at San Quentin Prison album. He replaced Luther Perkins who died in a house fire in 1968. Scarlett's mother is Vicky Cook, a former member of the Carter Family who went on to marry Bob and become a backing member of the Cash's stage show in her own right and who still performs, along with Bob, Scarlett and their youngest daughter Montana, as the original backing band for Johnny Cash, The Tennessee Three.

You may remember our humble reminiscing about the custom coach that toured Johnny Cash and his band around the country, but if not, check it out:  On the Road In Johnny Cash's Custom Tour Bus

Want a 4-door Mercedes-Benz SLS? Neither Do We. 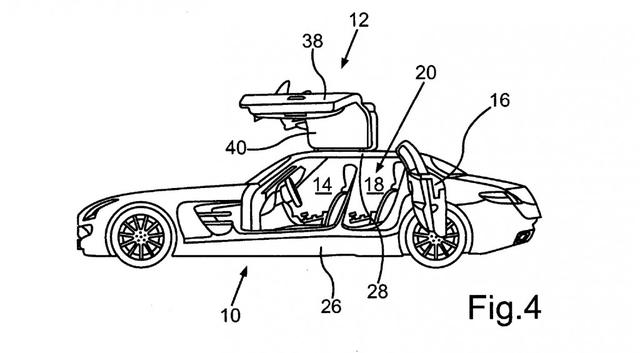 In an odd bit of marketing, or classic Germanic misdirection to confound their competitors, Mercedes filed a patent application for a four-door version of their enigmatic SLS AMG Gullwing revival. What's the point? Maybe to compete with the ever-increasing bevy of cars featuring true usefulness like the Ferrari FF and all those bustle-back BMW coupes that never seem to do very well in The States.
What do you think? We'd rather have two cars to fulfill the perceived need this car provides, maybe the "standard" SLS and an AMG E-class Wagon, but who knows, in the canyons of Beverly Hills maybe this is what it takes these days to avoid the embarrassment kids elsewhere feel being dropped off at school in a tattered Dodge pickup or a lowly Saturn wagon.

Bentley SUV, or How to Stay Relevant by Courting the Chinese 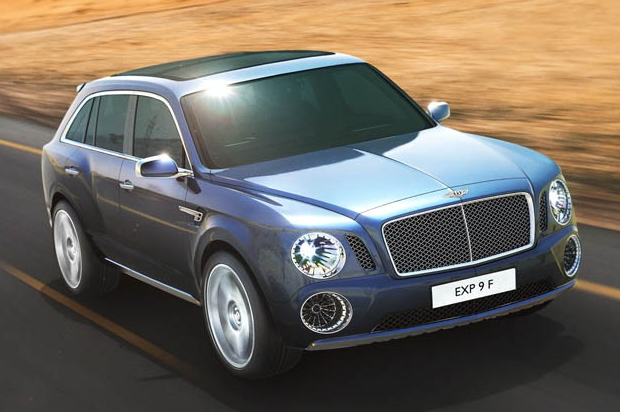 Bentley released official images of the EXP 9 F SUV (not quite the same allure as "Continental" or "Azure") today and while the concept of an off-road going Bentley is intriguing, the execution of design leaves us wondering if the designer himself will be executed for this toss-up of shiny bits and overwrought lines. Featuring rear haunches from the Mercedes GLK, a tail from the Audi Q7 (Bentley is owned by VW after all), an assemblage of tacky bling-y bits such as a Flying "B" inset into the side gills, and a bit of a sad face created by the stern looking front fascia, this SUV really underwhelmed us. Why the rear door handles are the widest point of the vehicle is mind boggling, and the fact that the fenders stick out so far that the wheel arch is actually imbedded into the sheet metal at the rear while bulging at the front makes this look more like an elementary student's Play-doh creation that anything that would have come out of Old Blighty in the past. Chrome outboard mirror surrounds? That may work in the grey-skied homeland and possibly the Pacific Northwest where the sun is as rare a sighting as Jackie-O in a dune buggy, but in the rest of the sun shiny world that's what we call a severe safety hazard due to glare. The huge oval exhausts at least negate the need for a trailer if all you're carrying are two canoes, they should fit in there quite nicely with a couple of bungee cords to lash 'em down.

We think we know why the new Bentley is surprisingly unattractive, with growth focused in the Chinese mainland where excess and hugeness go hand in and (for the priviledged few anyhow), and over-the-top cars do very well at the top end of the market, we can understand why the brand would simply smile and nod while debuting a vehicle that would have surely turned out differently if it was aimed at traditional US and European dealerships. After all, I've never heard the American public screaming "we need more turbine-like fog lamps" or "gimme my goddamned lotus flower-inspired wheels!" 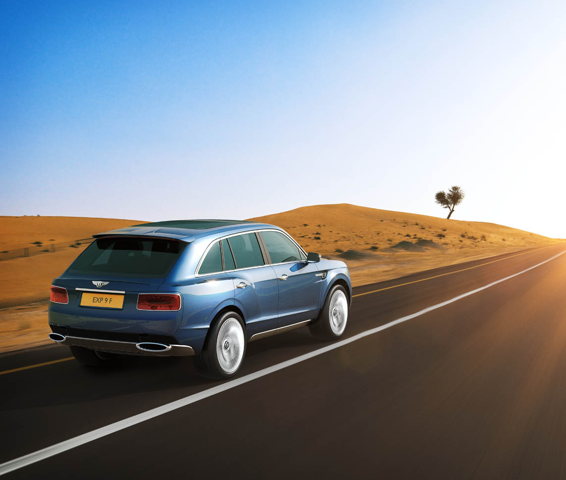 The "eyebrows" flanking the headlights give the car an unattractive, disapproving professorial stare, one that would make you feel like you did something wrong every time you approached it from the front. And what's with all that "junk in the trunk", every time we see a bespoke concept from Range Rover or any other high end off-roader company they toss in the requisite shotgun cases and picnic baskets... the few Bentley owners I know are regular people with regular needs, they take their kids to soccer practice and go to the grocery store, all activities that require real cargo space, not an imagined and antiquated idea of "high living." Surely these components are just for the concept, but make it an option not standard fare for a truck that will see every day use among it's eventual hordes of buyers.  Yup, despite out reservations in the looks department we are absolutely confident this thing will sell in unreal numbers even if left exactly as-is, and that's partly what's wrong with cars today, it seems in many instances "good enough" in the design halls is good enough for full production. The interior looks to be the stuff Bentley is known for, elegance and sumptuous quilting of fine leathers paired with exotic hardwoods, and we would have no objection to riding around in one of these, we just don't want to be spotted getting out of it. Given the opportunity, we'd choose a Bentley Dominator as the MotoArigato staff runabout, like those custom built for the Sultan of Brunei. 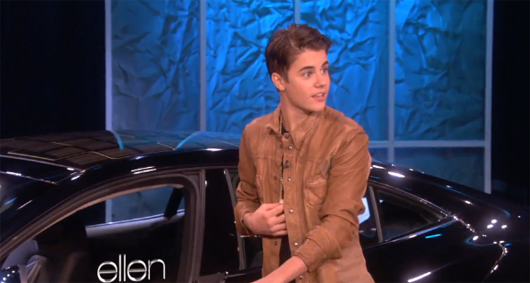 Justin Bieber turned 18 yesterday and in addition to treating himself to TWO mansions at a cost of about $14-million dollars, the teen idol snagged what we think is an even cooler gift from his manager. Despite having a name that sounds like it belongs to a cartoon Nazi, manager Scooter Braun gifted his protege' with one of the first available examples of the all-electric Fisker Karma while on the set of the Ellen show. With a window sticker of $116,000 for the fully optioned version, he is now counted among the vehicle's other famous owners, Leonardo DiCaprio, Colin Powell, and Al Gore.

Don't feel too bad for the kid, he also has a Batman themed Cadillac CTS-V customized by West Coast Customs, and has been spotted in at least two Ferrari's, a matte black F430, and a California hardtop convertible that he doesn't own but did have a minor fender bender while piloting.

Benz fanatics are already well-acquainted with Roy Spencer's popular site, Mercedes Heritage, and this week they featured a pair of W111's, a coupe and a cabriolet, that have been rescued from long-term storage. The article promises a "massive resurrection" for the '71 280se 3.5 coupe while their barn find-quality '65 220se cab will likely be sold as-is to a lucky buyer.

Check out the original article for full details, interesting analysis of the Data Cards, and some very cool photos of dusty W111's:  Sleeping Beauties @ MercedesHeritage.com