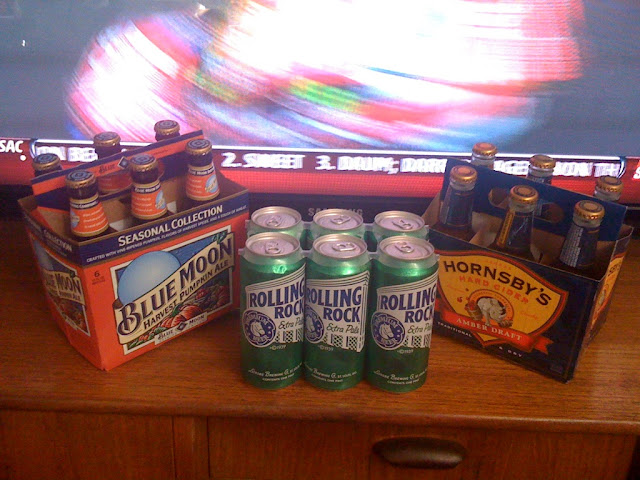 Check back throughout the day for *live* Drunk and Drunkerer commentary during the real life Deathrace 2000 Australian V8 Supercar event as I attempt to give commentary while progressively getting shitfaced. The cool-y titled Supercheap Bathurst 1000 is not quite what Americans would assume at first glance, that this is double the distance of the Indy 500, but Australia rolls metric so that's 1,000 kilometers. The "Bathurst 621.37" just doesn't have the same je ne sais quoi now does it? Take into account that this all happens on the widowmaker of a road course known as the Mount Panorama Circuit that features a strip of pavement that twists, dips and dives like a horny dolphin searching for a friends-with-benefits situation.
Here we go!


4:17pm PST: It's interesting to hear the discussion of the (understandable) rivalry between Holden and Ford fans in Australian motorsport. Red (Holden) and Blue (Ford) banners, t-shirts and flags dominate the hillsides with only the most bold (or stupid) choosing to cross over into enemy territory. Supposedly, drivers have been subjected to death threats for changing loyalties from one team to another.

4:31pm PST: We were just treated to footage of NASCAR legend Darryl Waltrip touring the track as a passenger with Jason Bright at the wheel. Waltrip was totally flustered, red faced and holding the "oh shit" handle, his voice pitched school-girl high while he made proclamations such as "I just lost my lunch and I haven't had any" paired with truly classic gems like "this is a geological oddity." God love that man.

4:50pm PST: In-car shots make it appear that a large part of the track is as narrow as Monte Carlo, this is getting exciting.

5:11pm PST: Third beer of the race... on an empty stomach. Just realized I didn't have breakfast or lunch, just like Waltrip. This could get bad/totally amazing.

5:27pm PST: LeMans-style driver changes in this race. Some teams already switching. Commentator just said the average time is 13-seconds to get in or out of the cars.

5:50pm PST: Driver stated during interview that this series is coming to the US in "a couple of years". Is this actually happening or is he just being optimistic? Need, this, race, here. Booze update: Finished another hard cider and a pumpkin ale, getting deeper into the Rolling Rock; need to bring this up to speed.

6:46pm PST: Loving the fact that Waltrip can't get over the concept of Australian's shifting with their left hand. He's mentioned this at least three times so far.

7:11pm PST: "We're hearing rain at the top of the mountain." A nice Spa-style downpour on only part of the track, essentially creating a cluster-fuck of tire changes, which is always good TV.

8:21pm PST: I disappeared for a bit, made some smoked salmon nachos. Perfect drunk food, couldn't replicate the recipe if I tried. Sorry TGI Friday's. Eat a dick Guy Fieri! Some news coming in... a race steward injured somewhere else on the hillside. Pit releases are super tight, basically stacking the cars up on the out. The Australians don't give a fuck, they are here to drive.

8:59pm PST: Steve Johnson's car crashes with a HUGE fire. Driver is out of the wreckage. Latest report is that it was Johnson's co-driver who crashed. Driver is good, fire out, and Safety Car is on track. 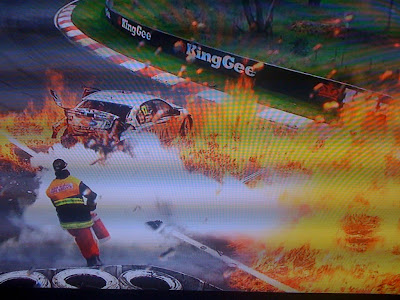 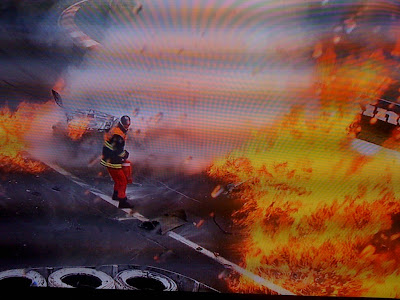 9:10pm PST: Totally unrelated, but this is how I have been spending my commercial breaks. Nightmares Fear Factory photo stream

9:48pm PST: This has been a really exciting race so far. Lots of action, beautiful scenery and the aerial shots really give you an accurate sense of the speed these cars are competing at. What a challenging track, this is sure to become a popular race franchise for Speed Channel.

10:09pm PST: The more I see of this event the more I am utterly impressed by the fact that these guys nail their apexes perfectly over and over again, for the duration of this rather lengthy race, really some amazing stuff. Wow, just now driver Wincup slowed for no clear reason, but it seems he is pulling it together for the time being. Speculation is he is low on fuel but calculations show he should be fine. Wincup is now out, speculation is the battery at this point.

10:11pm PST: Wincup is running again! Inexplicably his car restarted and is running the track tho slower than the rest of the traffic. "Lack of fuel or lack of spark" is still being thrown around along with battery concerns. It now looks as though he will simply return to the pits and call it a day.

10:50pm PST: Really digging the in-car shots of the driver's faces. We don't get a lot of that in other series racing, a cool and very intimate shot that I would like to see more of. HDTV + in-car camera = Botox enters motorsports for the first time.

10:59pm PST: Two Holden's lead the pack, still battling for the lead. Lowndes in the Vodafone car is really pushing to take the lead from Tander if possible. Commentators say five car lengths but in actuality, it's more like two... but maybe they're using metric.

11:03pm PST: Waltrip calls it, "No more Mr. Nice Guy, this is for the win!" The battle for first is intense especially after 1,000 kilometers, and Tander holds on to his lead but only just barely. Lowndes really pushed for the top spot by riding the tail of Tander's car, but there just weren't enough curves remaining for him to pull it off.

11:04pm PST:  Garth Tander wins the 2011 Bathurst 1000 in a Holden!
Holy shit, I need to go to bed. So far I've drank myself into near oblivion, ate twice, puked once, drank myself into actual oblivion and somehow managed to dress one of my dogs in a new sweater. (I have no recollection of this event, yet there she is, wearing a new sweater, and I'm the only one here.)