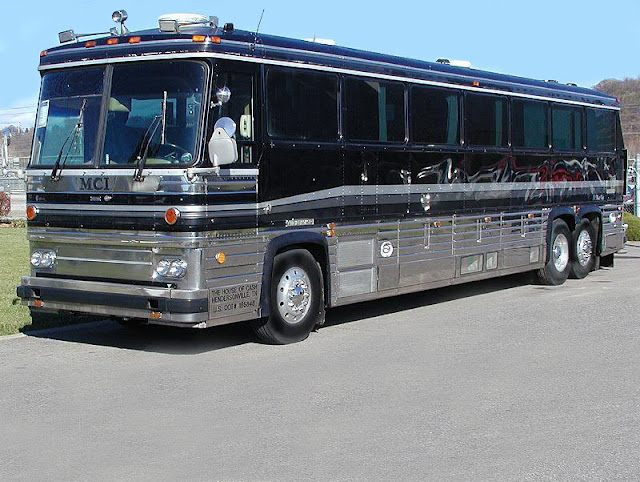 “I have a home that takes me anywhere I need to go, that cradles me and comforts me, that lets me nod off in the mountains and wake up in the plains."

Such are the words Johnny Cash wrote about his beloved home away from home, a majestic tour bus, specifically a customized MCI motorcoach upgraded with powertrain and suspension boosts, sound deadening, and other specialized equipment to the tune of over $500,000... in 1979 dollars. The silver, grey and black bus would come to be known as the most visible symbol of the extravagance and grandeur of a Johnny Cash show, with rumors spreading in each town along the route as excited fans spotted the fabled "JC Unit One" on local roadways and news spread that Johnny Cash had arrived in town.

Cash was not only a very private man, but one who enjoyed his personal freedoms. He chose to buy and build his own road cruiser rather than follow the usual rock star routine of renting a bus, because he wanted his to have all the personal touches and features of home paired with a sense of stability that familiar settings year after year would provide. Seeing that Cash toured with his young son, John Jr., and that his wife June Carter was an integral part of the stage show, it was necessary that the family be comfortable for those fleeting moments of private time while touring North America, tho it is said the bus did make at least one European appearance. In 1991, as tour support for Cash's side music project The Highwaymen, he used the bus to shuttle band-mates Kris Kristofferson, Willie Nelson and Waylon Jennings.

Cash sold the coach just after his wife of thirty-five years, June, died in 2003, and the Man In Black himself succumbed just four short months later from complications of diabetes, or as many who knew him believe is more likely, he died of a broken heart. The bus was sold by Cash to a ministry and then purchased by a car dealer who eventually sold it via eBay to an experienced collector in North Carolina, Dave Wright. Wright valued the bus for it's place in American music history and made a personal vow to return it to it's original condition by having a road worthy restoration completed at the original facilities. 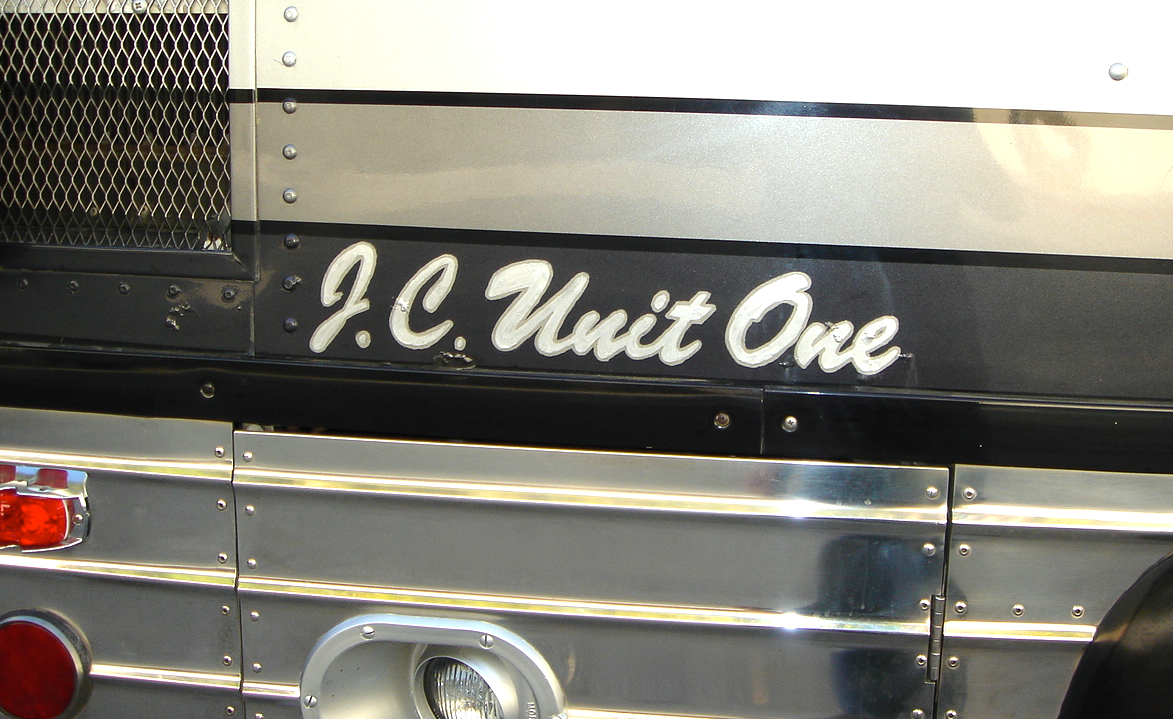 "We call it Unit One. I love my bus. It really is my home too.  When I make it off another plane through another airport, the sight of that big black MCI waiting by the curb sends waves of relief through me – Aah! – safety, familiarity, solitude.  Peace at last. My cocoon.”

At the time, I was fortunate enough to be guiding Johnny Cash's original band, the Tennessee Three, as their Personal Manager and my duties were guiding them on what the they should do now that The Man himself was gone. We all agreed that the best thing they could do was keep the unique sound they created together alive by continuing to tour and play out in public to audiences who still needed their fix. We worked hard to get the band back on the road after John's death, a band that still included two of the original three members. The drummer, WS "Fluke" Holland, is also the first drummer in rock and roll music, featured on the original Carl Perkins version of Blue Suede Shoes. Holland was also key to creating Elvis Presley's early image, albeit unwittingly, by providing the poor southern singer with clothing for his various appearances on TV and concert, all of which were sized too big for the eventual "King of Rock and Roll." These oversized jackets would quickly become a trademark of Elvis' and are still in the personal collection of Holland in his Jackson, Tennessee home.

Bob Wootton played guitar, taking over for Luther Perkins who died in 1968, but also sang vocals with Cash, acted as his body double for TV and film work, and served as Cash's bodyguard on the road. After Cash's death Wootton took over lead vocals for the live act and recordings, and they continue to tour the US and Europe to this day. One evening, I got a message from Bob's wife, Vicky, telling me how someone had contacted her to buy the original license plates that Bob (also the bus driver at times) had ordered but never got a chance to put on before it was sold. She told me that Dave Wright owned the JC Unit One and wanted the plates to complete the restoration he was planning. After a long conversation trading stories, Wright agreed to allow the Tennessee Three full use of the bus for touring, stating that it was the right thing to do, getting it back on the open road with the band who made it all possible.

We used the bus for some time, making appearances to support the release of the biopic about Cash's life "Walk the Line." The JC Unit One was as big a celebrity as the band as it loomed always near as a welcomed respite on a moment's notice from genuine, but exuberant, crowds.  It delivered the band to the red carpet screening in Hollywood where they were reunited with old friends like Jane Seymour (Cash once appeared on Dr. Quinn Medicine Woman), during in-store appearances at Tower Records, touring the backlot of Paramount Pictures, and even served as the Green Room for us during the band's Oscar-night appearance on Jimmy Kimmel Live. Fellow guest Johnny Knoxville was left like a starry-eyed fan as he waited patiently outside the bus door for Wootton and Holland to exit. He spoke briefly with the men, who had no idea who he was but were very courteous nonetheless, telling them how he had purchased Cash's small mountaintop cabin, before allowing the guys to head off to sound check, all the while smiling like a star-struck teenager. You see, it's not just meeting the band members that's so special to people like Knoxville, once they are invited on board the bus and witness the personalized touches and begin to hear the stories, that they are transported back to a time and place that is unique to each individual, perhaps it was the first time they saw Johnny Cash on television or heard the unforgettable line "I shot a man in Reno, just to watch him die."

I loved telling people the stories of how Cash, not wanting to be told he couldn't export a rare wood from his Cinnamon Hill farm in Jamaica to his Tennessee estate, decied to make packing crates out of the wood for some furniture pieces he was shipping back to the States. Once the crates arrived in Tennessee, he simply disassembled them and used the wood for JC Unit One's stateroom. His room featured the expected black leather, dark burl wood and gold fittings. He chose powder blue suede and fabric to drape every inch of June's room; her favorite color and one he dubbed "June Blue". The two keeping separate sleeping quarters because of John's tendency to always be too hot while June was always complaining of how cold she was, so each unit had it's own climate controls. Always the country boy, there is a small brass plaque affixed to the entry door to June's cabin that reads "Queen's Box." When Cash was playing a show for the Queen of England at the Royal Albert Concert Hall, he wandered around the venue between sound checks, and promptly stole liberated the plaque from the entry to the Queen's private viewing box with his pocket knife. Cash also enjoyed embellishment for the sake of a good story, such as bragging to guests that the alligator hide lining the bathroom door was from a beast he shot himself in a near life or death struggle, when in actuality it was off-the-shelf vinyl with an embossed lizard print. (I already know I'm getting an ass-whoopin' in the afterlife for revealing that one.)

Eventually the bus was returned to Dave Wright, who then donated it to the Rock and Roll Hall of Fame Museum in Cleveland, Ohio where it still remains on display in the outside plaza during the warm months. Visitors to the museum can take a tour of the interior of the bus, and see for themselves all the things I've described above to help personalize the man behind the legend. I only knew Cash from stories told by those who spent literally decades by his side, until I was able to sit in his chair, sleep in his bed and drink at his table. While on the bus I sometimes caught myself slipping in and out of a dream-like state, the flashes of street lights upon my face, or strangers giving us a thumbs-up on anonymous roadways, transported me like a time machine as I began to understand, by seeing what he saw and feeling what he felt, how this elegant yet simple coach would become a touchstone for the Cash family for the last half of John's life. Even in death, John R. Cash was an intimidating personality, but one you felt entirely welcomed by at the same time. The same duality that followed him and became his trademark was still tangible. Maybe he somehow knew we were bringing his much-loved JC Unit One out on the road for one last tour, one last trip over the Rockies, one last deadhead streak across the grey ribbons of asphalt in a rolling five-star hotel that he came to know as "home." 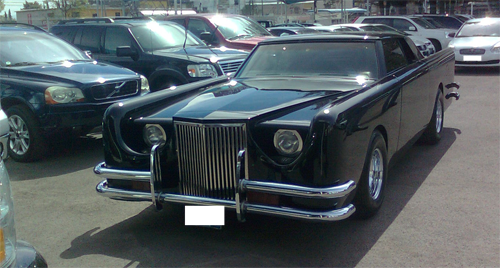 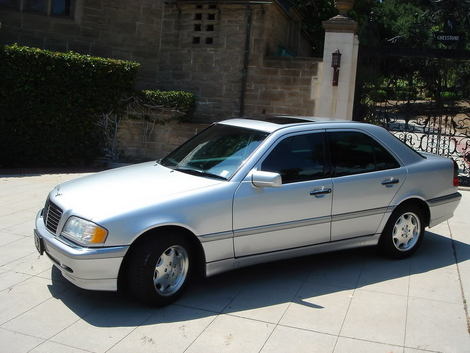 1990's era Mercedes-Benz sedans make for high style motoring on the cheap Driving a W202 Mercedes-Benz is entirely possible for the enthusiast on a budget, assuming you are willing to perform regular maintenance and turn your own wrench from time to time.  Mercedes-Benz ownership has long served as the emblem of privilege.  The brilliant star out front pointing the way to some adventure or another, turning heads and inspiring emotions ranging from awe to envy.  The legendary cars flaunt their well-earned reputation for engineering excellence, shepherding their owners from city apartment to country estate in safety and comfort.  What was once a joy only to be experienced by the monied few, is now available to a wider population at a price that wouldn’t even buy you a brand new Toyota.  I’m talking about the W202 C-class from Mercedes-Benz. “W202” is car-geek lingo for Mercedes’ in-house chassis designation for a range of cars that included, in the US, the C220, C230, C280,