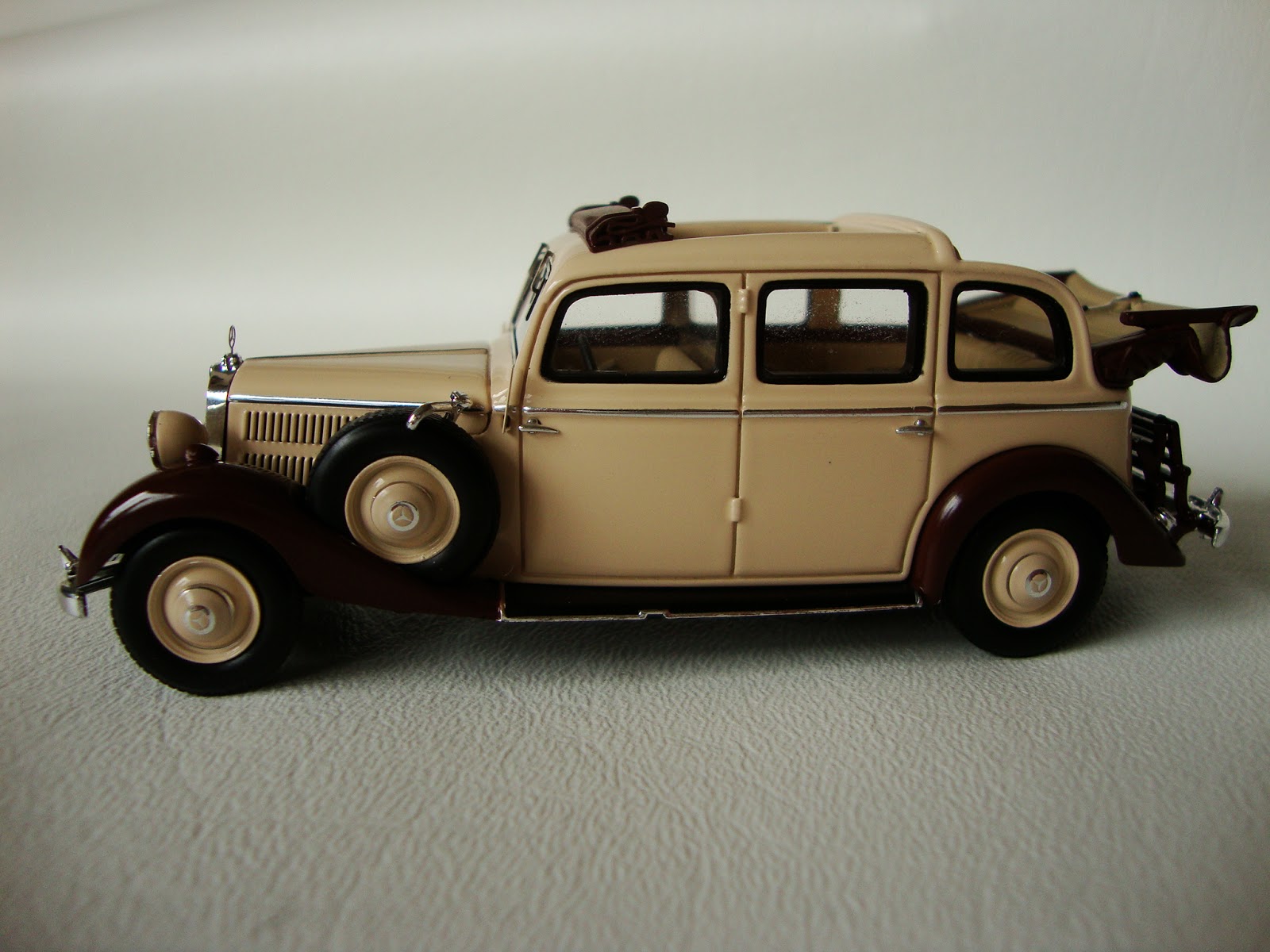 Esval Models kindly sent us their latest 1:43 scale model to review. We know that many of our readers collect all forms of automobilia, and scale models seems to top the list by a significant margin, so we hope you will enjoy our point-by-point evaluation of Esval's newest creation, the 1936-1940 Mercedes-Benz 260D Pullman Landaulet. 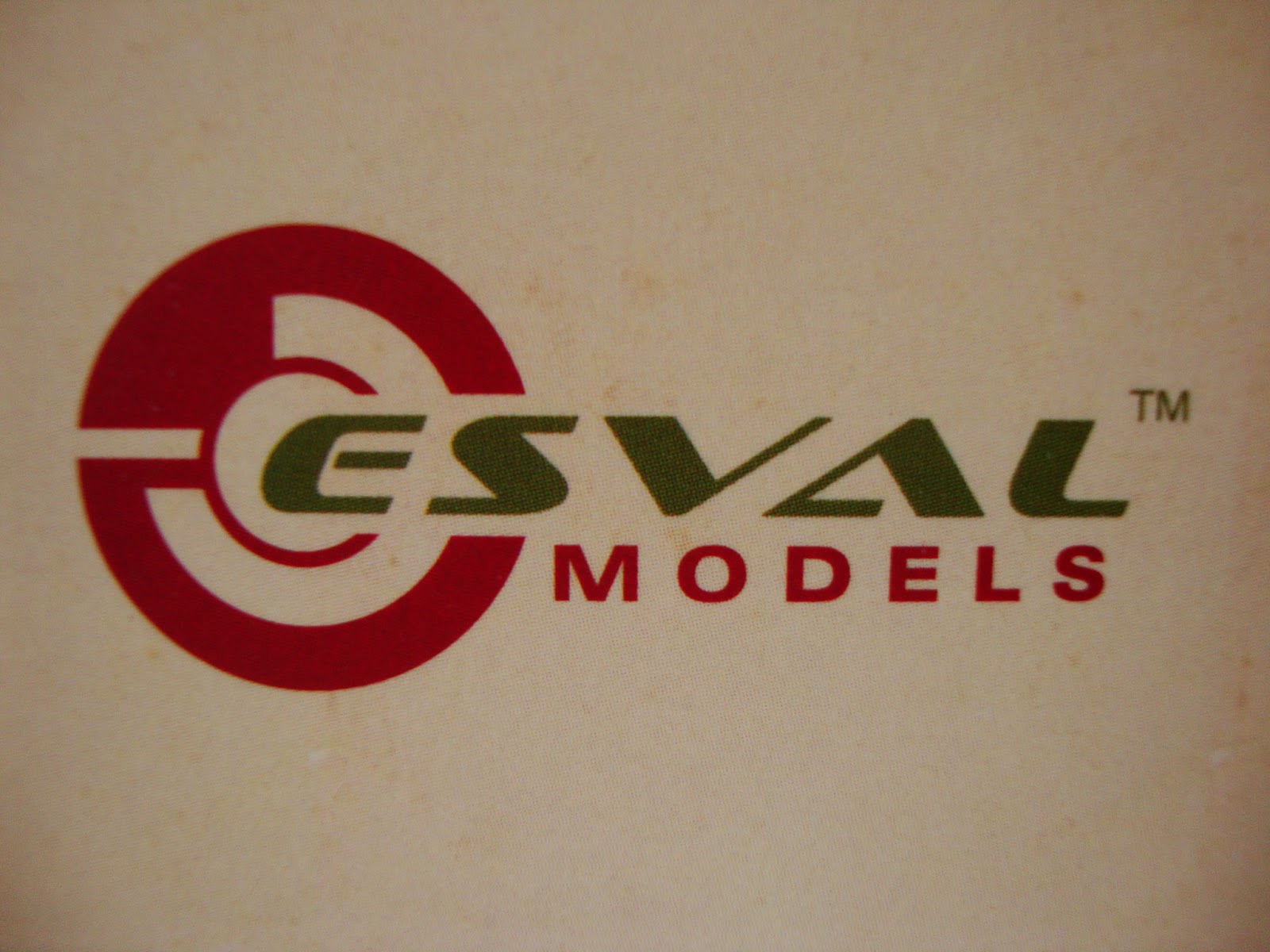 Created by Collectors
Esval Models was founded by a small group of enthusiasts who have grown their personal scale model collections over the last 40-years and wanted to create highly realistic replicas with a collector's eye towards the finer details. Often models are created by factories that have no interest in getting every little bit right, sometimes because of lack of research or an economic decision to create a simpler piece at the cost of accuracy, but when the company principals are also collectors themselves, you can see the improvement in terms of scale correctness and construction. 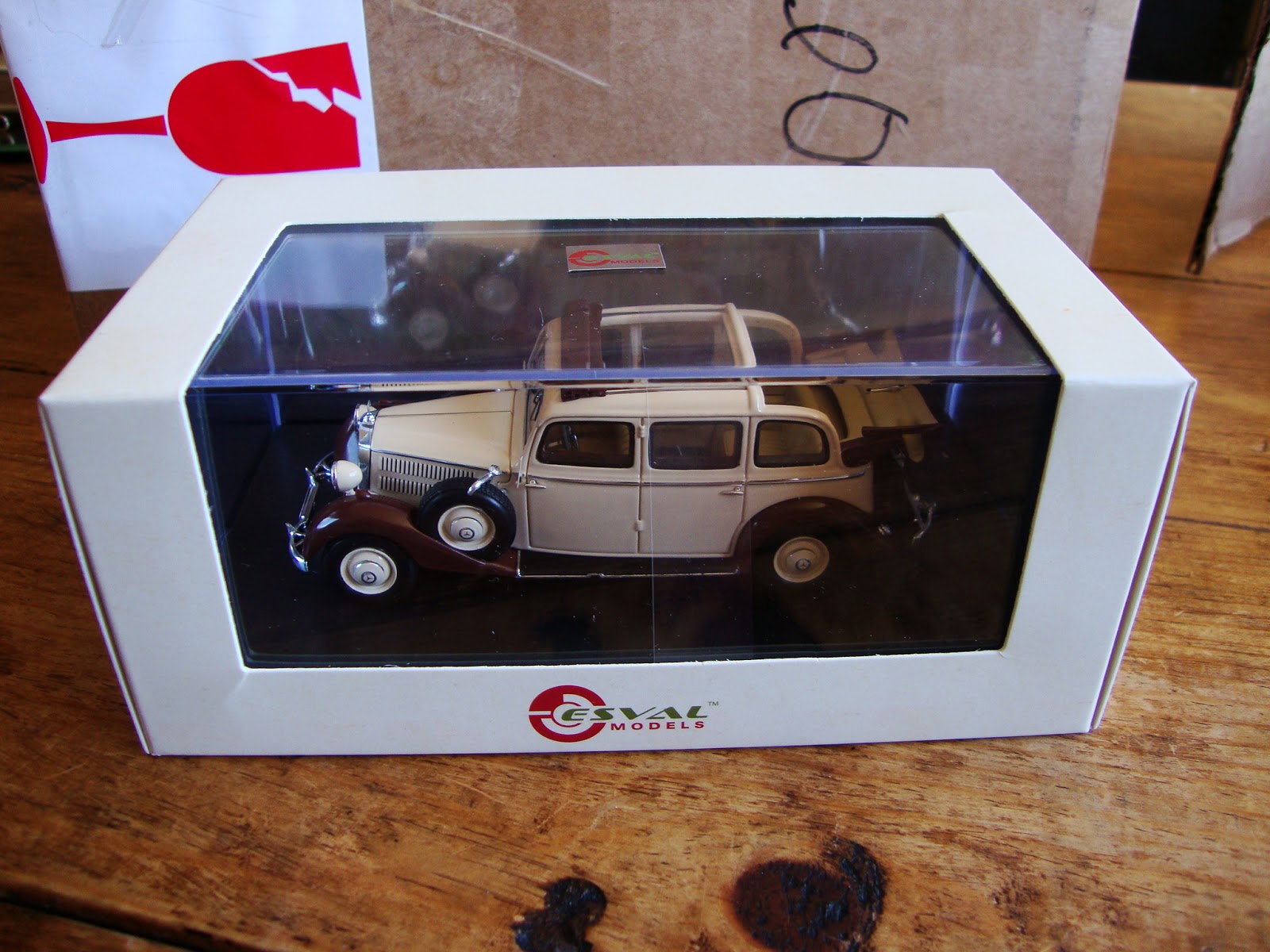 Packaging
The cardstock display box immediately exudes retro-nostalgia with it's muted sepia hue, emblazoned with a classically elegant logo made up of a stylized wheel in burgundy with the "Esval" text in forest green to complete the vintage look.

The outer box has a cutout for viewing the display case within and features mirrored panels to show you every side of the car even before removing it. We were pleased, but not surprised, to see a hologram decal affixed to the bottom of the box indicating an official license by Daimler, Mercedes-Benz's parent company.

Inside is a standard acrylic display case with a black plastic base that allows an anchor screw & posts to keep the model in place. The base reads, "1936-1940 Mercedes-Benz 260D Pullman Landaulet" in silver ink.

As evidence of Esval Model's intention to deliver your new pride and joy intact, there are further hold-downs in the form of a thin plastic strap additionally securing the car to the base that you would remove and discard, as well as an adhesive disc at each end to keep the acrylic lid in place until you are ready to remove it. 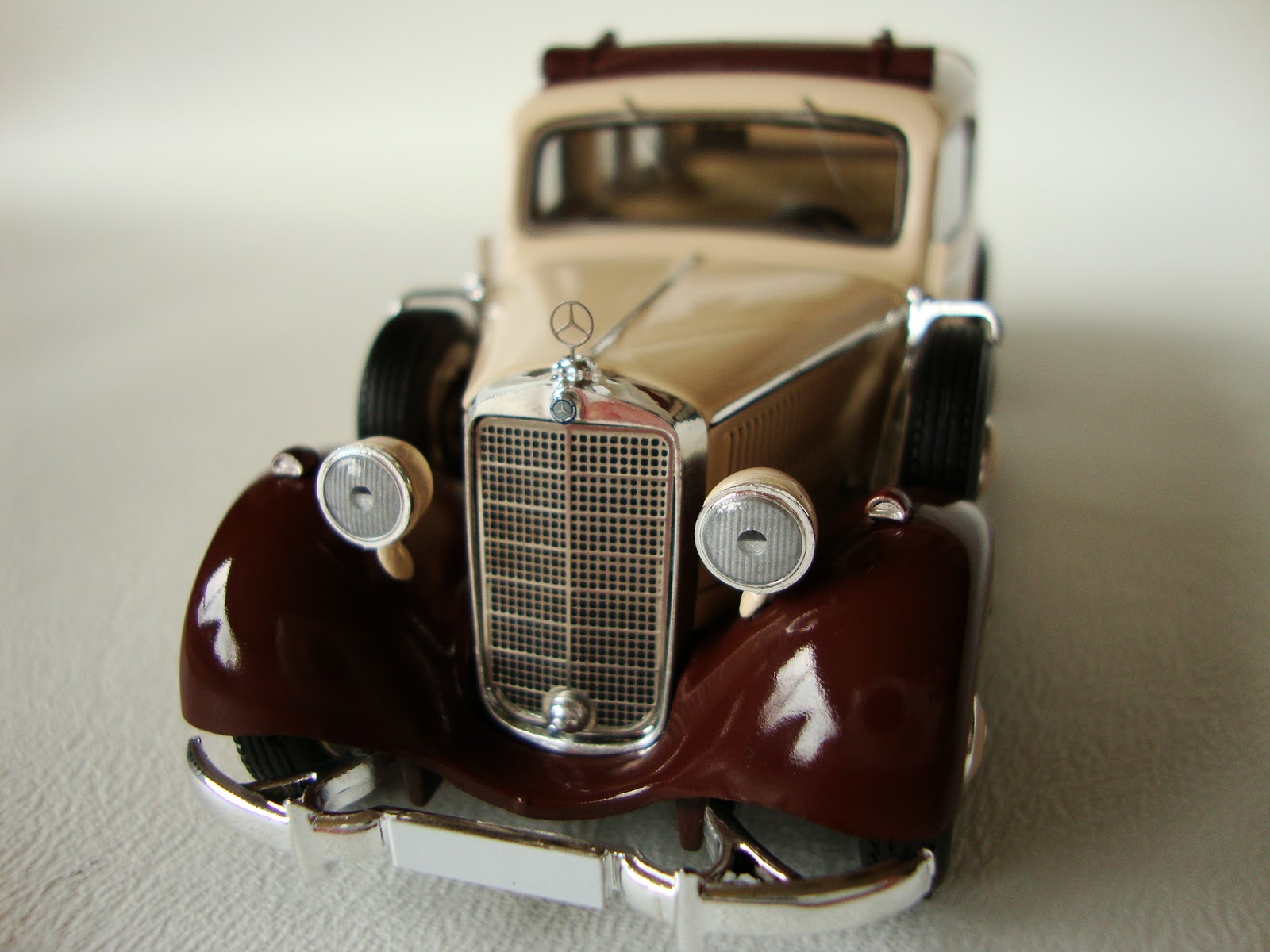 The Car- Exterior
At first glance we were stunned by the level of detail, which only expanded as our eyes began to crawl over the piece unlike most models where the more you look the more flaws you detect. We immediately noticed the most visible part of any Mercedes, that iconic hood star, which here is rendered in what we feel is the most scale-accurate reproduction yet seen on any model. The headlights are an especially masterful bit of engineering consisting of several tiny parts to replicate the original full-scale units perfectly. The creative folks at Esval Models understood that sometimes even the most meticulously restored original cars can have modern or non-period substitutions, this is often the case with headlights, yet here they are depicted in perfectly original factory accuracy. This may not translate in photos as well but in person, the effect is delightful. The light mounts are also aimed perfectly straight ahead, something you may take for granted but is an issue more often than it should be when buying models.

The folds in the fabric, both inside and out, are wonderfully rendered on the stowed roof panel, with the very best sculpting being reserved for the foward-most folded panel which is perfectly scaled and realistic in the way weight and gravity is expertly suggested. That front panel also has two tiny chrome buckles on the tie-down straps.

Windows are up all around, a personal preference to be sure, but one we appreciate. We especially love the wheel covers which are stunningly accurate even to the width of the chrome strip and scale of the center stars. A rear luggage rack in the folded position is ready for that pixie-sized road trip into the countryside, or just a few feet further down your mantlepiece. Tiny wiper blades are perfectly rendered albeit their mounting holes may be overly large. The engine cowl has rows of vents running along each side that are actually open and would allow air to pass through if the tiny car was able to run under it's own power, that's something many modern full size cars no longer have, choosing to utilize add-on ducts purely for appearances. Detroit, you could learn something from these folks!

The paint is simply sublime, with great care taken to polish it to a luster that even 1:43 sized concours judges would appreciate. The body has a bit more shine than the fenders but neither detracts from the other. We can only assume a fair amount of hand work was done to achieve this effect. Coach lines intending to replicate chrome strips seem to have been hand-applied with skill unrivaled this side of a Rolls-Royce factory pinstriper. We learned that in reality Esval Models uses a new technology to create these chrome bits to such terrific effect. The same method is how the wheel cover stars are achieved. Chrome accents a few other bits and pieces for a next-level of detail that you would normally be paying much more for if this were an offering from another brand.

We enjoy that the number plates were left blank, something you almost never see on other models that either place the model designation there, or perhaps the number plate of the actual car the model was based on. Given the variety of colors you can order each model type in, we like being able to customize with your own tags if you so choose.

The undercarriage is really more of a base plate on this model, but a perfectly understandable trade-off when you consider all the detail work and paint quality lavished on the parts you actually spend time looking at. The axels are straight metal rods, not convoluted plastic pins replicating a suspension, so for those of us who like to occasionally take our models for a late night spin across the dining room table after the rest of the brood is fast asleep, you can rest assured this car won't collapse under your meaty paws. 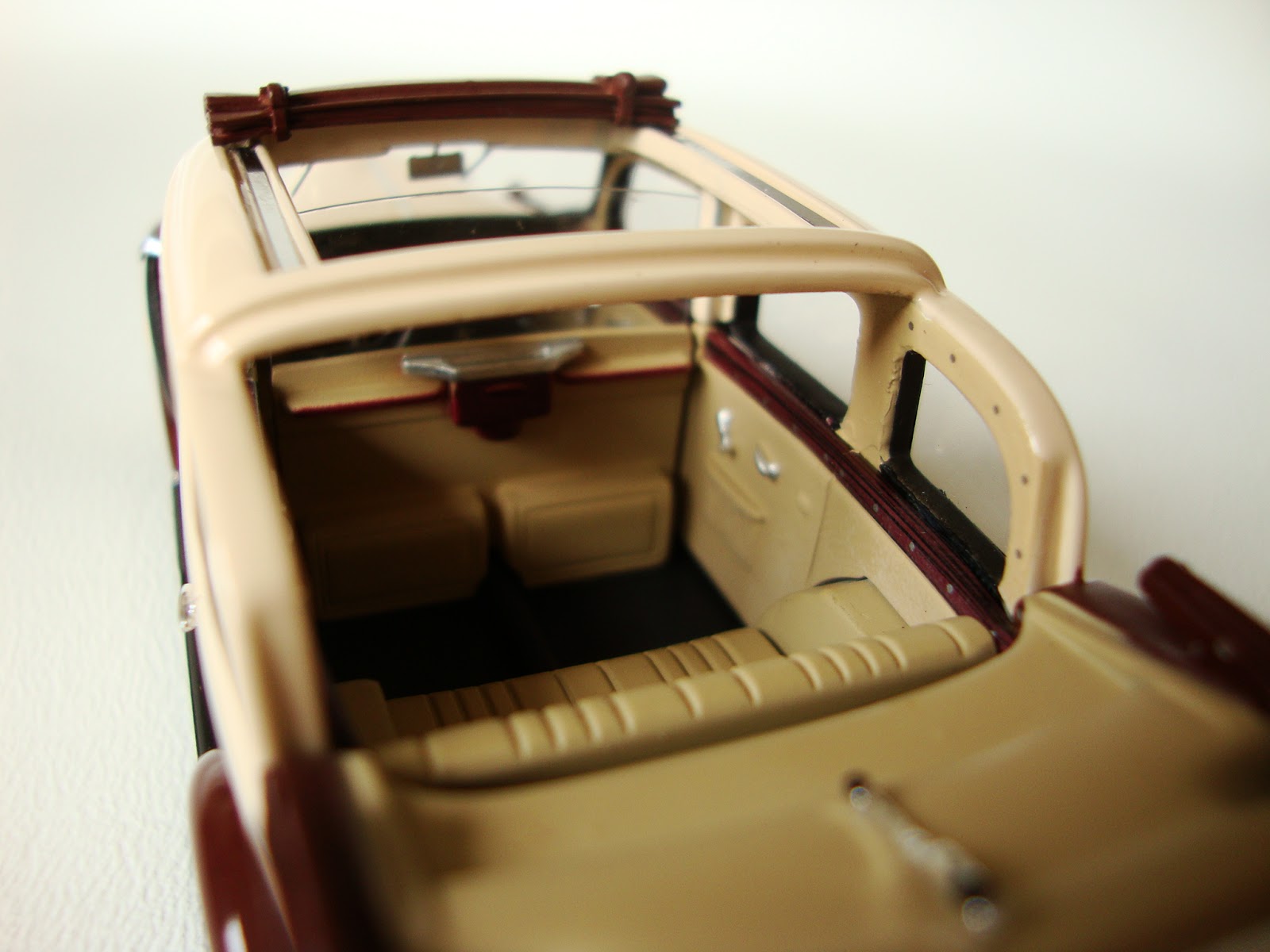 The Car- Interior
The interior is somewhat less detailed than the exterior and uses cast panels for doors and floors without much in the way of applied add-ons, but the effect remains much the same simply because of the care taken in both the original sculpt and final paint detailing of these pieces. The wood has tiny stripes painted within each piece to replicate the exotic veneers used in their full-size cousins. The factory accurate matte texture of the seats and door cards contrasts the shinier finish of the wood elements to add even more realism.

Rearview mirror, dash gauge cluster, arm rests, ashtrays, folded jump seats, and other typical accoutrements are all there with foot pedals, shifter and parking brake applied as separate castings. The only real flaw we noticed was on the rear seats where they meet the floor, the paint mask was apparently loose on our model so the tan seat color doesn't fully reach the floor. To be fair, this was only really noticeable once we put an LED flashlight on the model for a full evaluation and that section of the interior is quite hard to see from normal viewing angles, and on other variations with fixed roof panels would be virtually impossible to detect, if present at all.

As you further dive in you discover tiny metal handles for releasing the landau top, situated beneath the rear roof bow. Another handle placed at the rear stands ready to lift the roof at the first sign of rainfall, and even the roof rails are presented in an incredibly realistic satin finish, something that would usually be fabricated in chrome or left painted on lesser models. We're told this is but one example of that collectors eye for detail we spoke about earlier, the rails having the same care and attention lavished on them as the rest of the car. These rails are so realistic we found ourselves searching for the tiny grease gun to keep them lubricated, recognizing that as a necessary bit of maintenance on our full-sized MB's.

There's even a divider window between the passenger and driver compartments that is perfectly scaled in thickness, just like the windows.

Overall we feel this model from Esval is among the very best in existence, especially at it's price point. We are of the thought that spending more may buy you a model with greater detail underneath the car but as far as a shelf-ready display model is concerned, this is as good as it gets. Before our review sample arrived we presumed the model would be comparable to the finer examples from Minichamps judging from the photos we saw online, but once we had our Mercedes in-hand we recognized that the offerings from Esval Models blows it's competitors right off the asphalt. The initial models are said to have taken two years of product development before being market ready, but new offerings will begin to appear quicker now that Esval has overcome many of the initial growing pains that come with starting a new business from scratch.

Esval is a new player in the scale model game only having come to market in February of this year, but one that will surely thrive given the overall attention to quality, detail, enthusiasm for their products and level of customer outreach. Heck, they even print an invitation right on the box asking for upcoming model suggestions, so go ahead and send a message begging for that scaled down dream car, they are listening! Our suggestions? How about the one-off Pininfarina W113 Pagoda, or an early W111 Coupe with US-style headlights (why do they all have Euro lenses and side reflectors?) or the Spanish Royal Family's W31 G4.
The company email for suggestions is: ideas@esvalmodels.com if you're interested in reaching out.

Variations
There are four variations of this particular casting each with it's own unique roof configuration.

Esval's first and only other offering at the moment, the 1941 & 42 Packard Limousine, comes in two color options for each year for a total of four variations.

For more information about Esval Models and their product line visit them at www.esvalmodels.com


Click Read More below to view the full gallery of high resolution images. 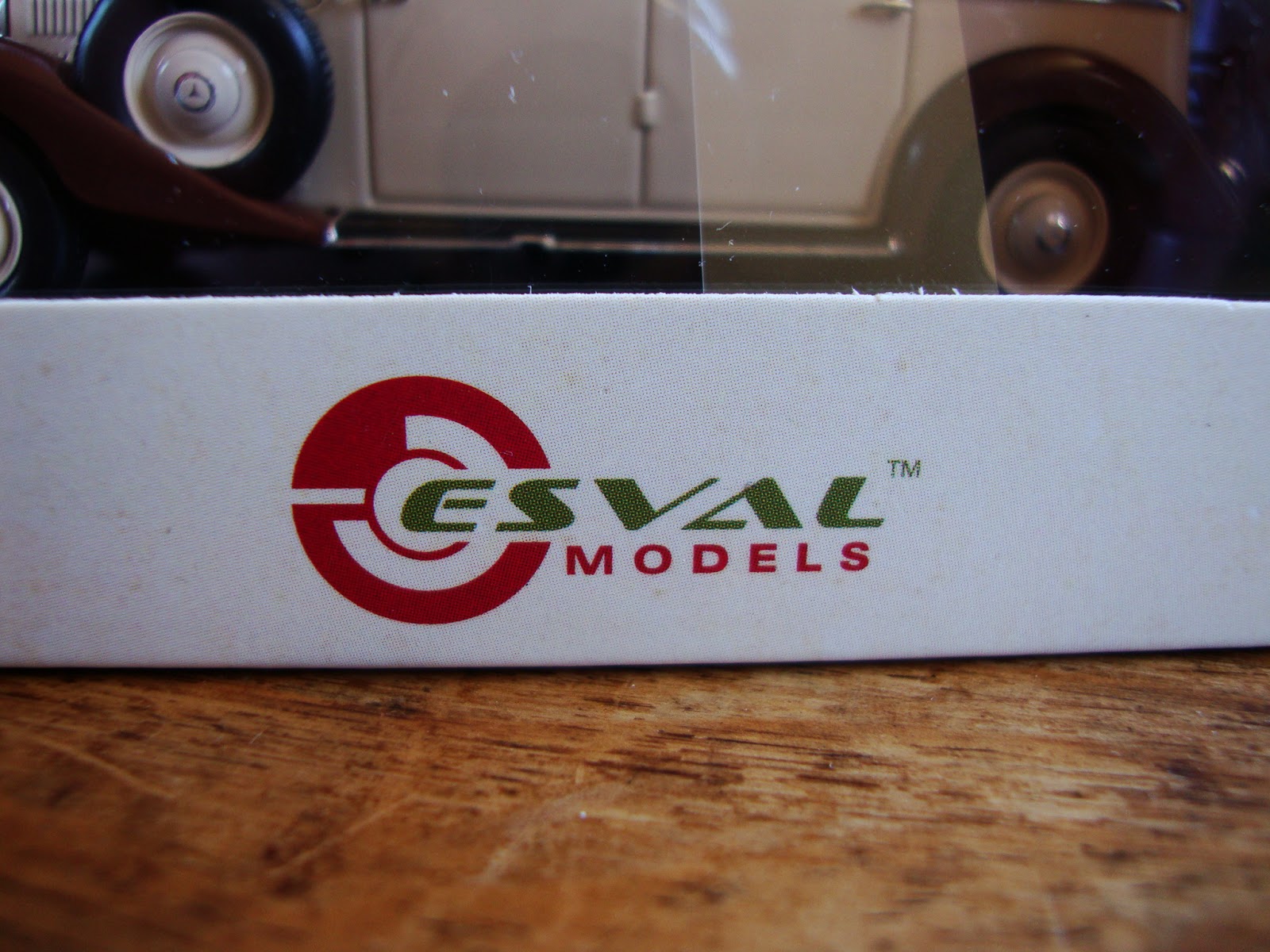 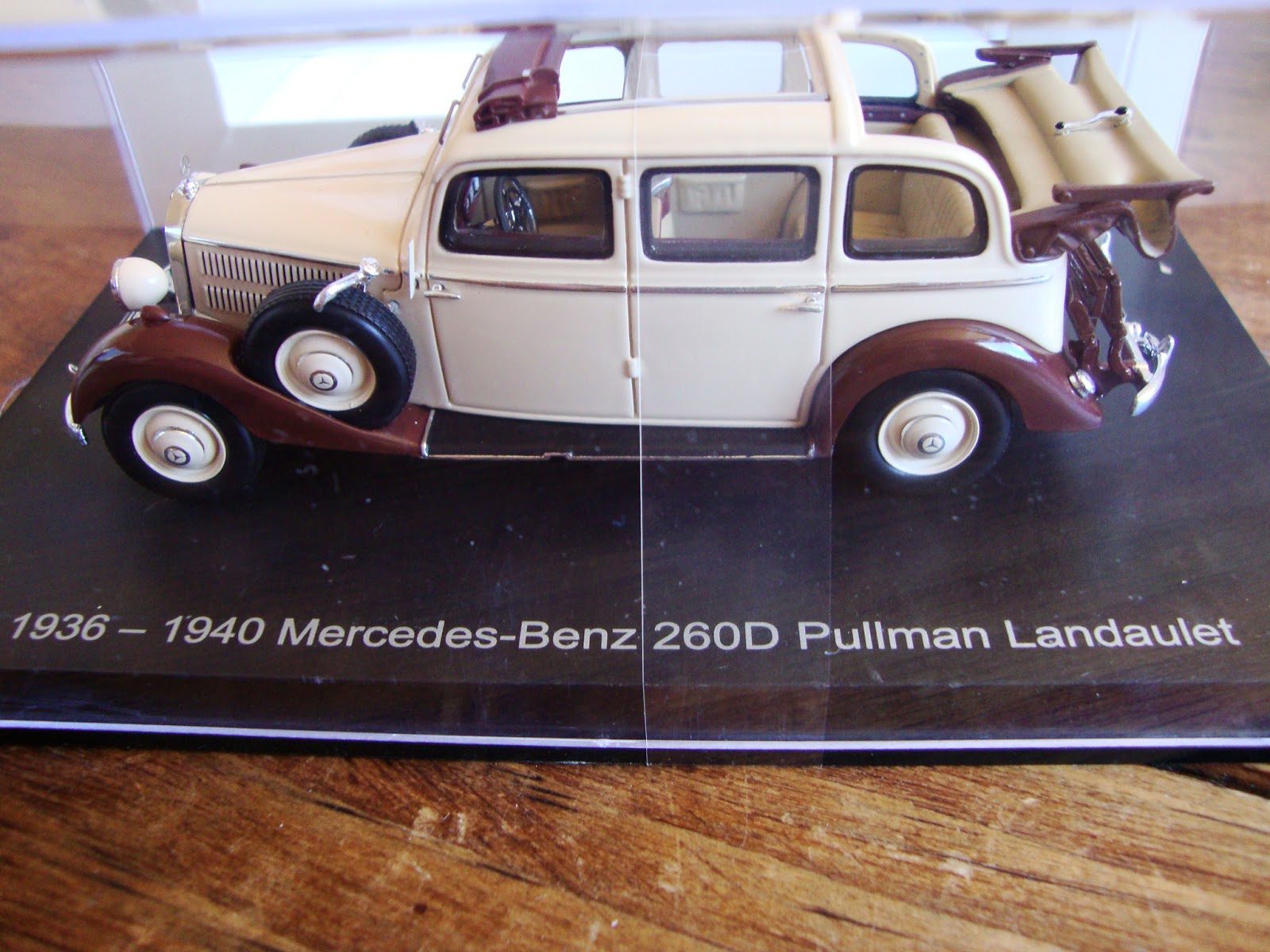 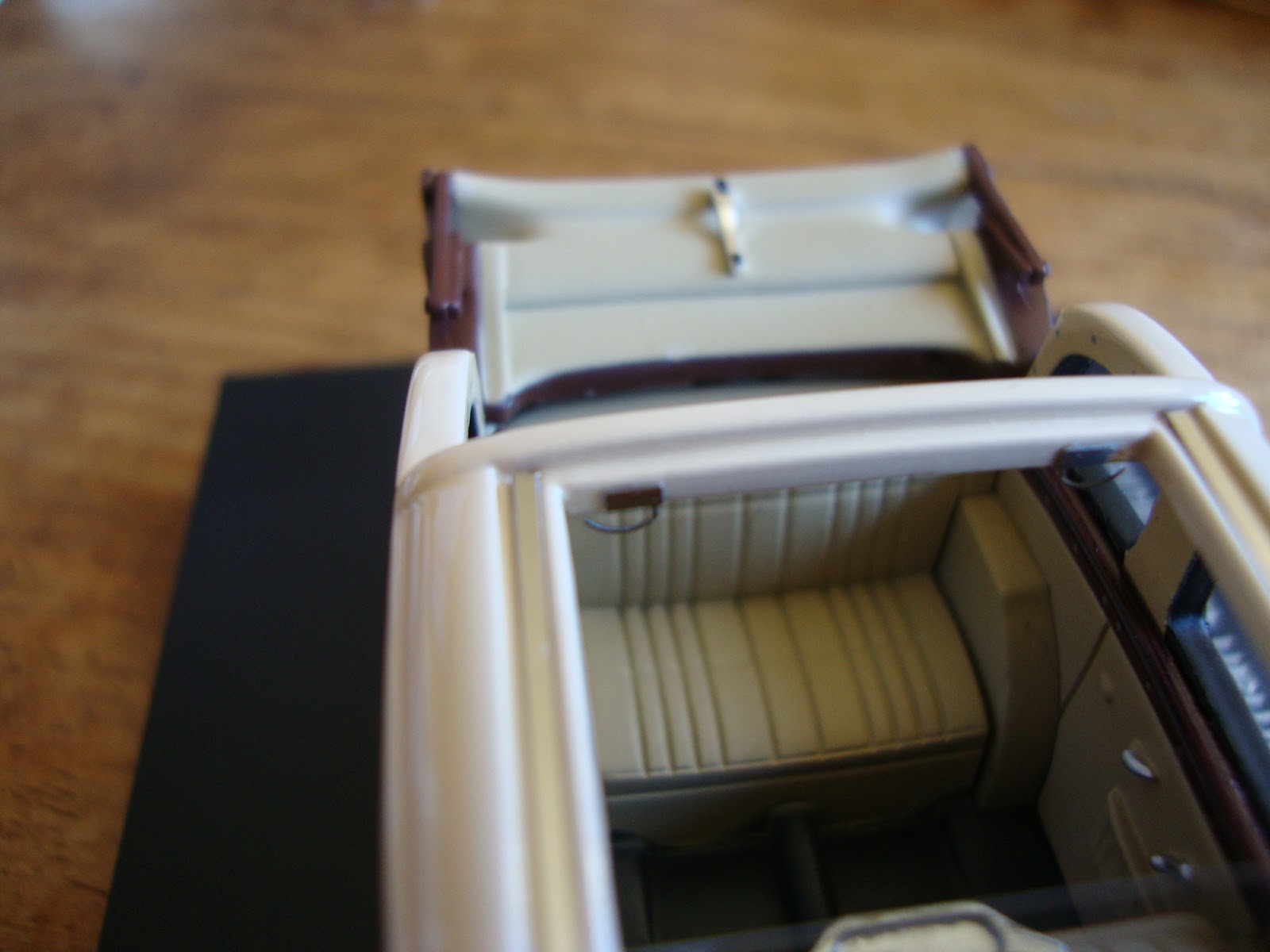 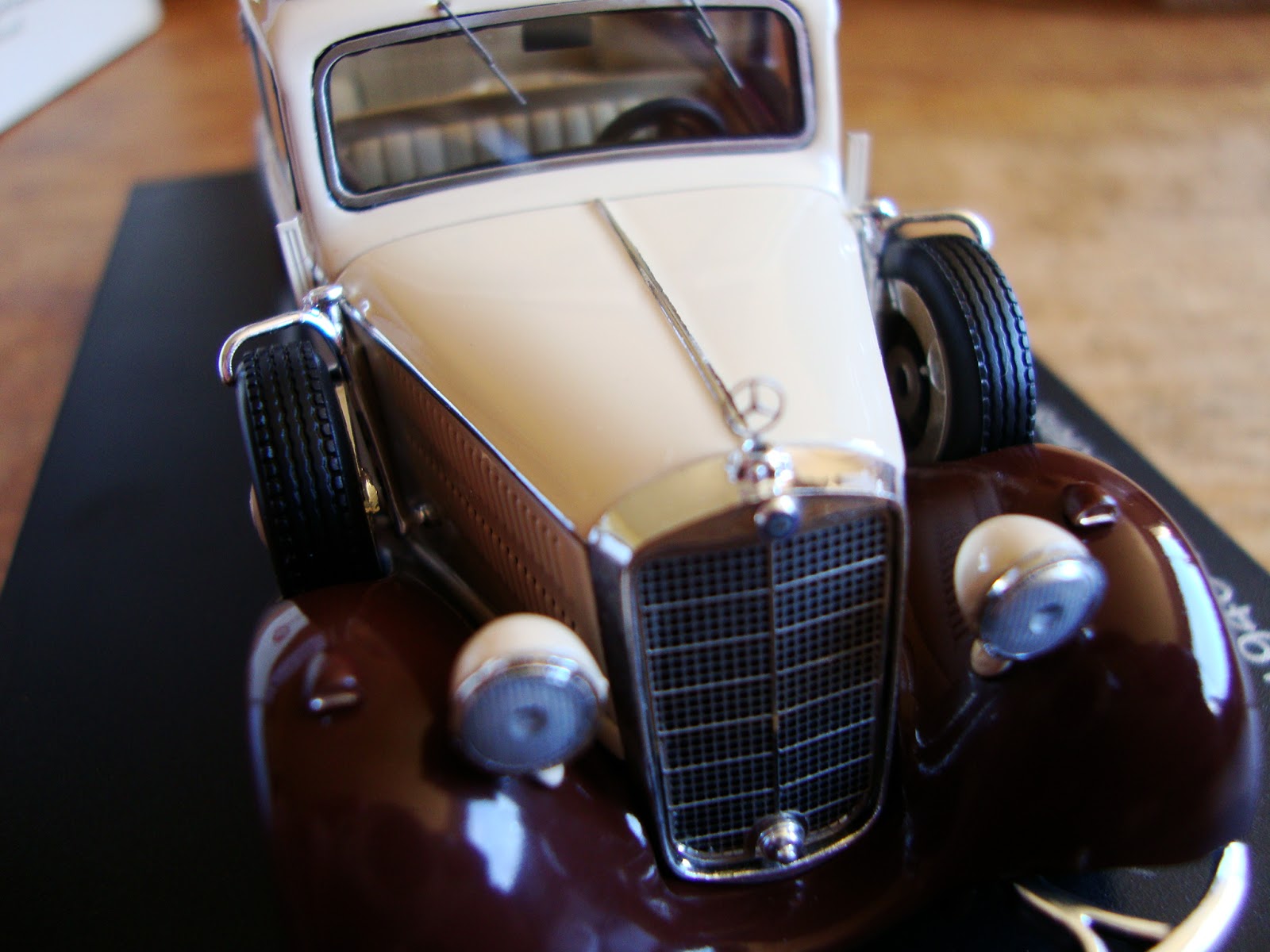 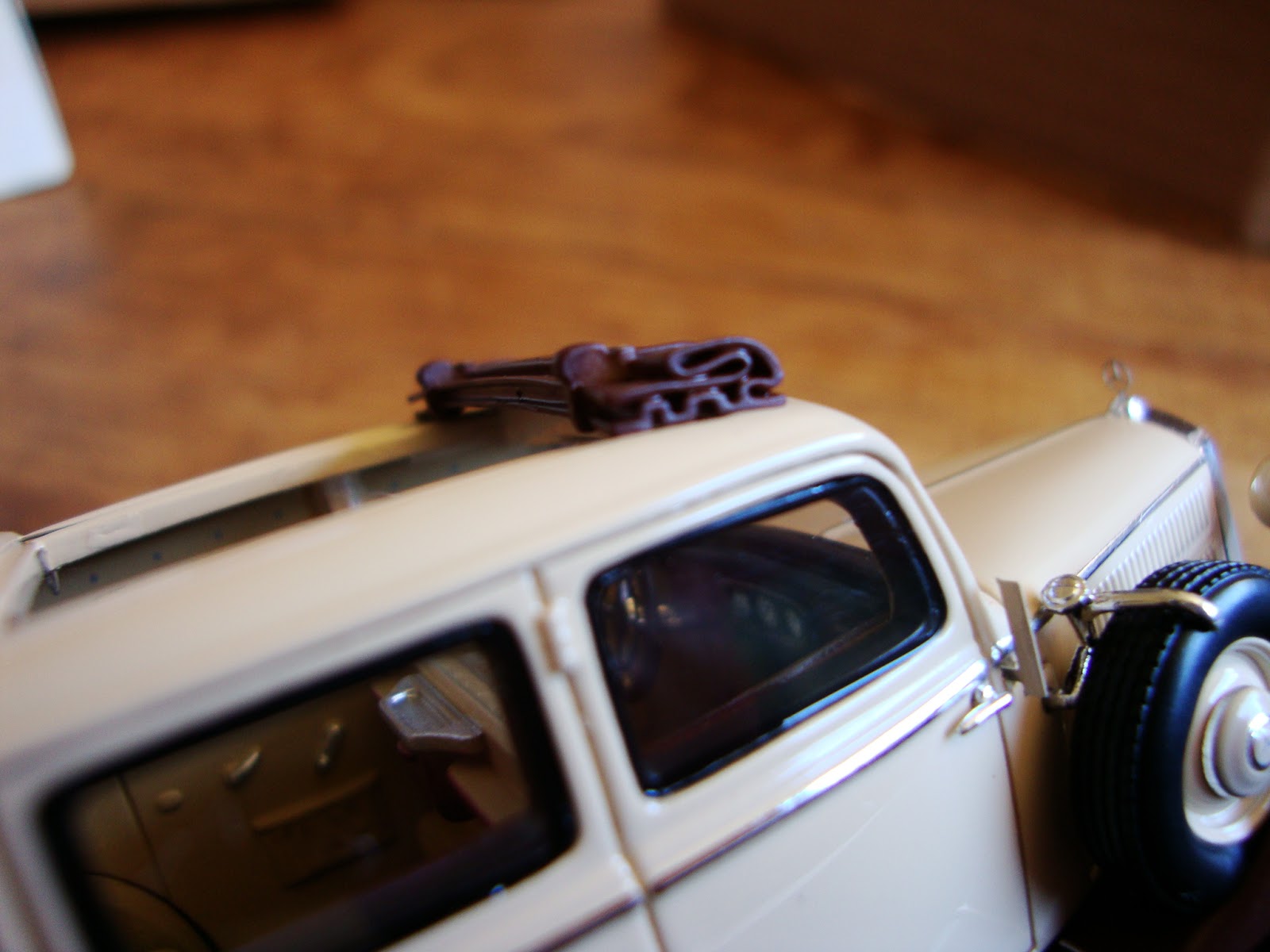 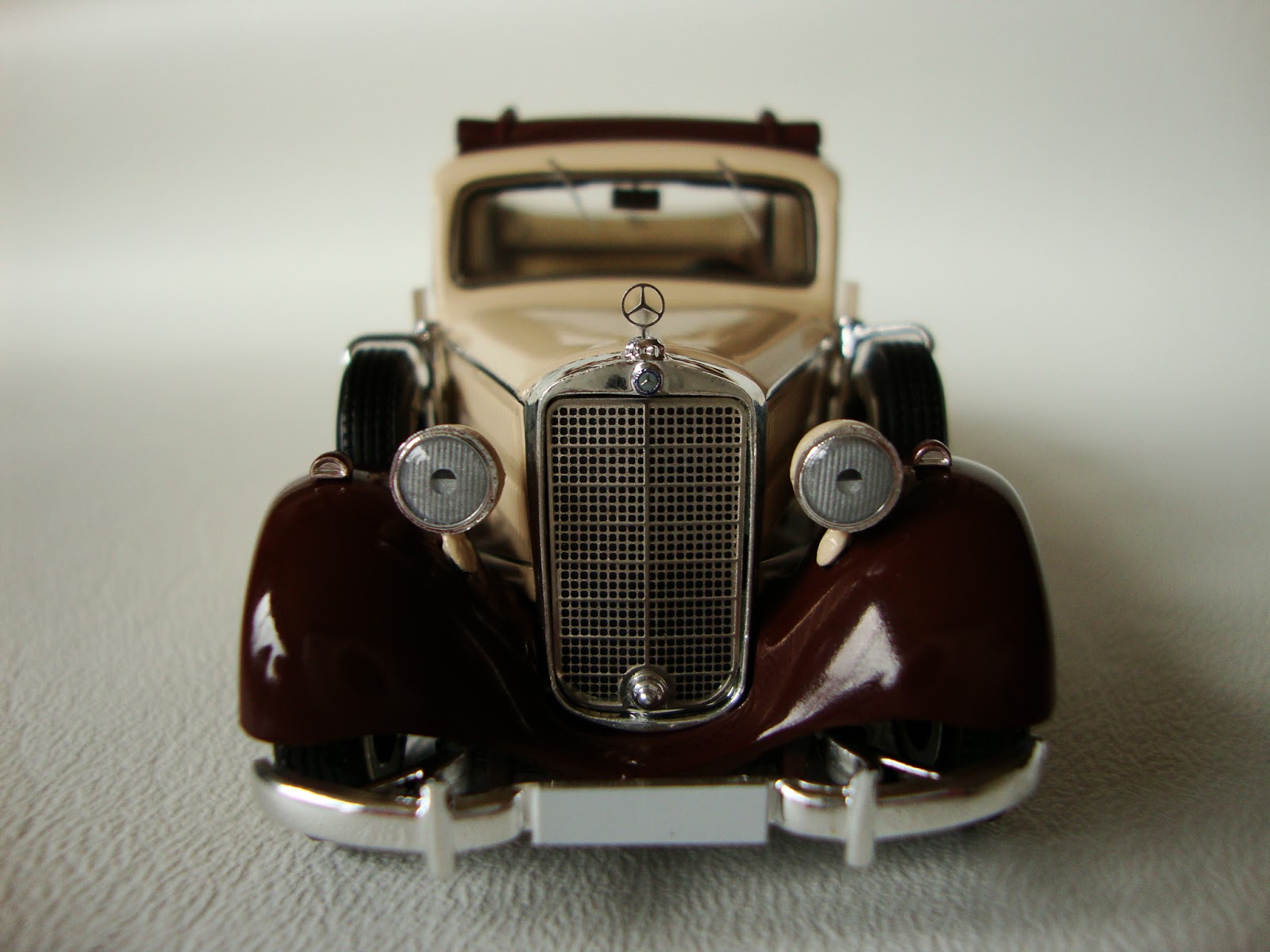 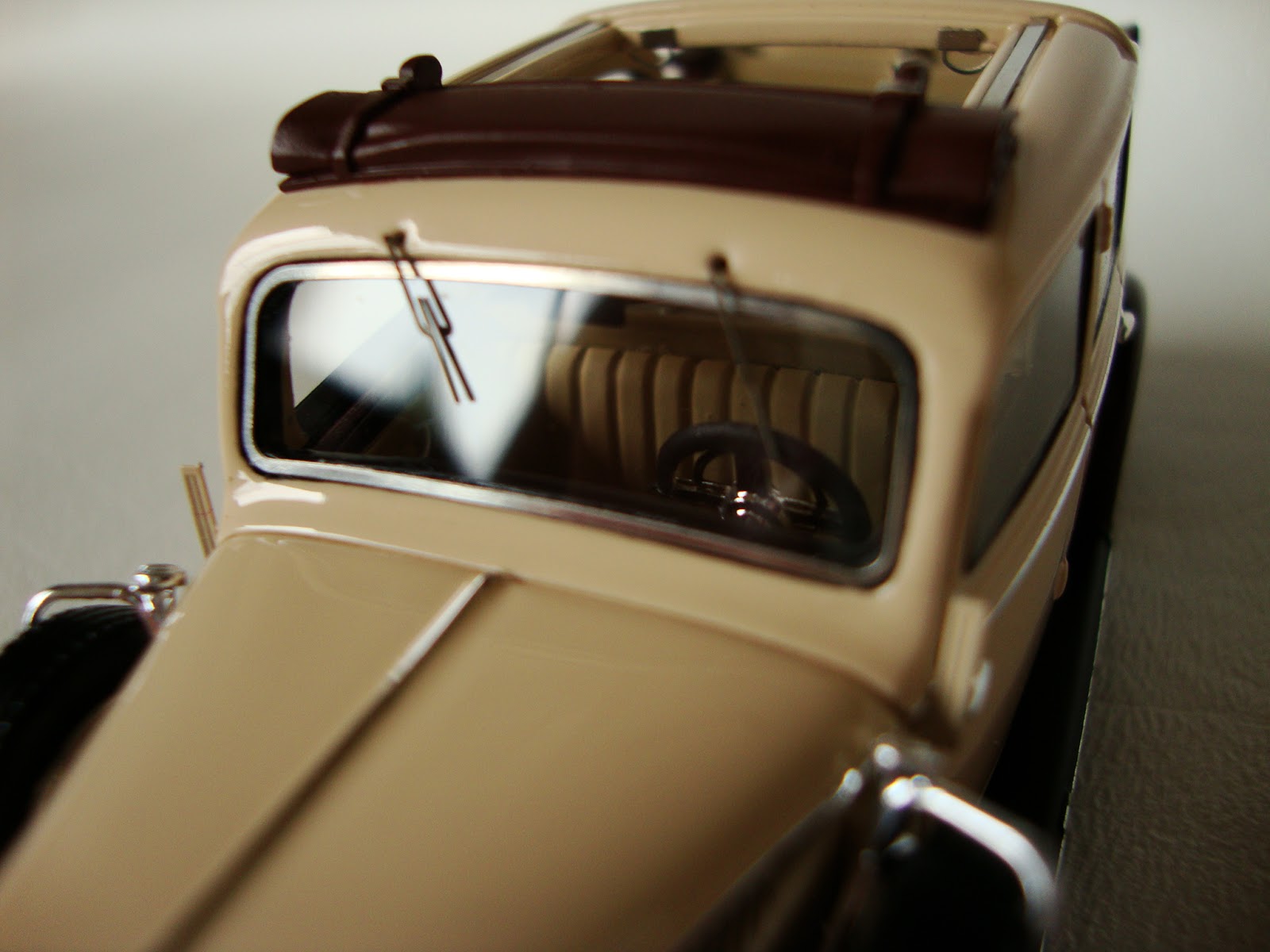 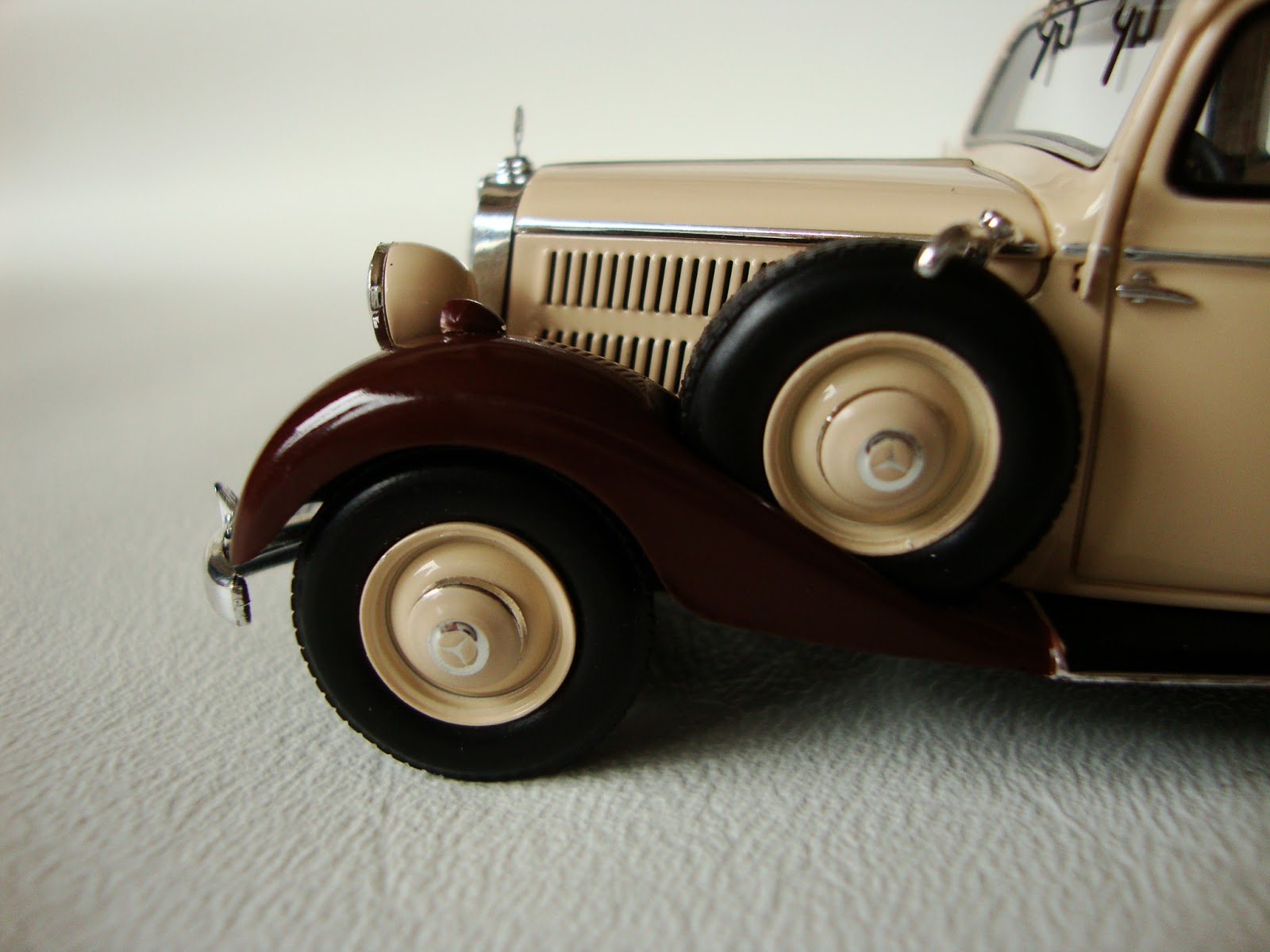 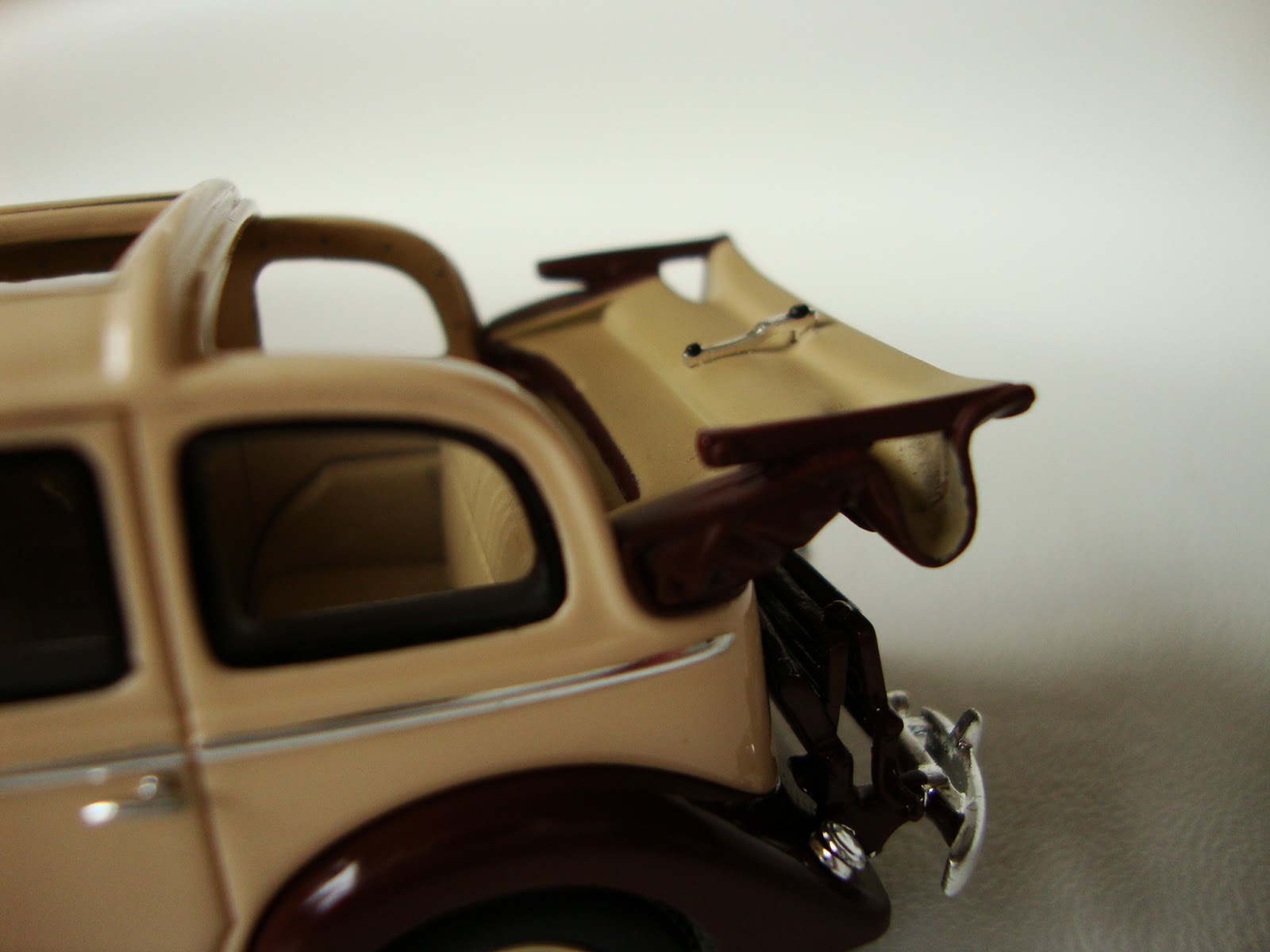 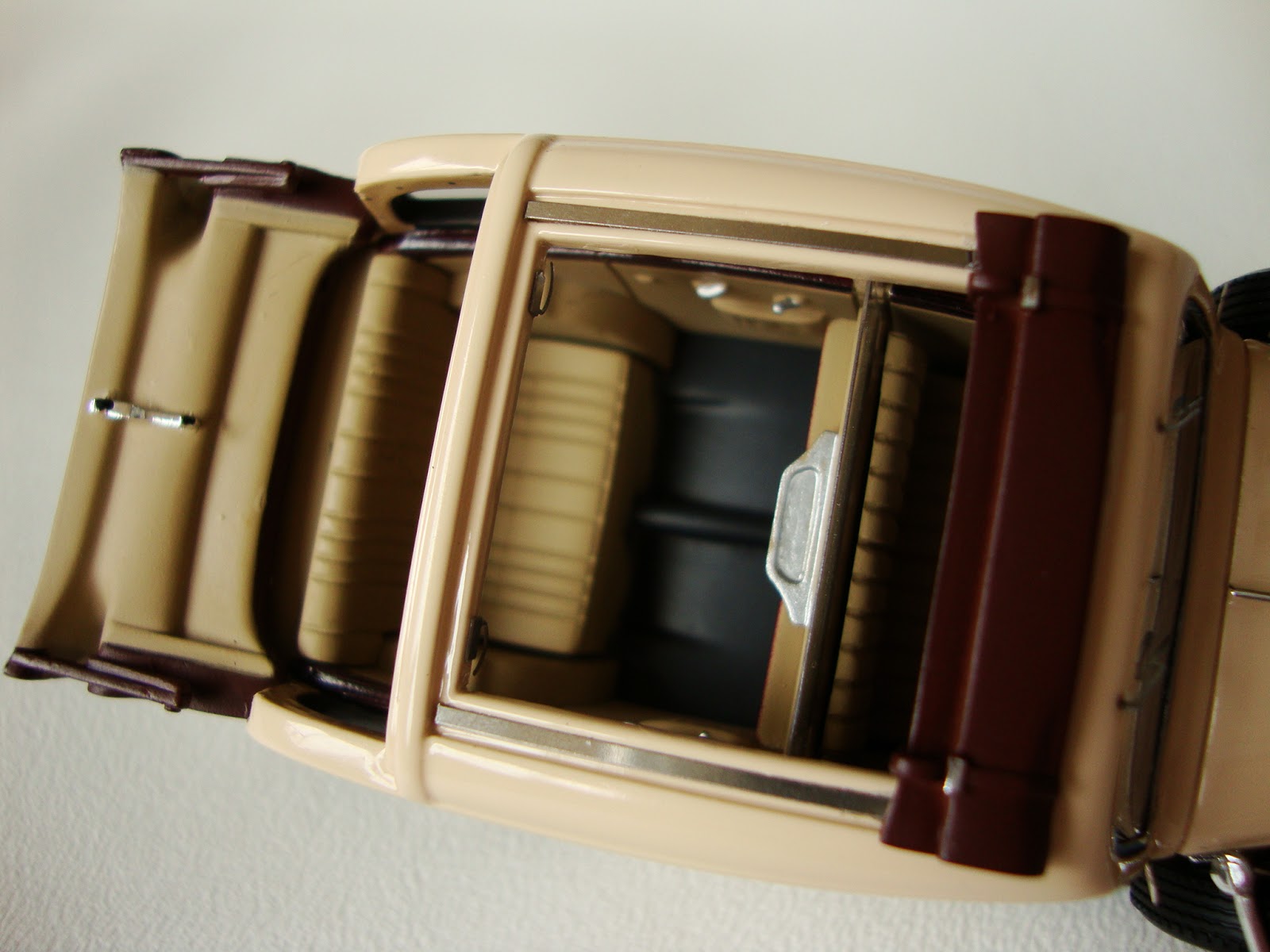 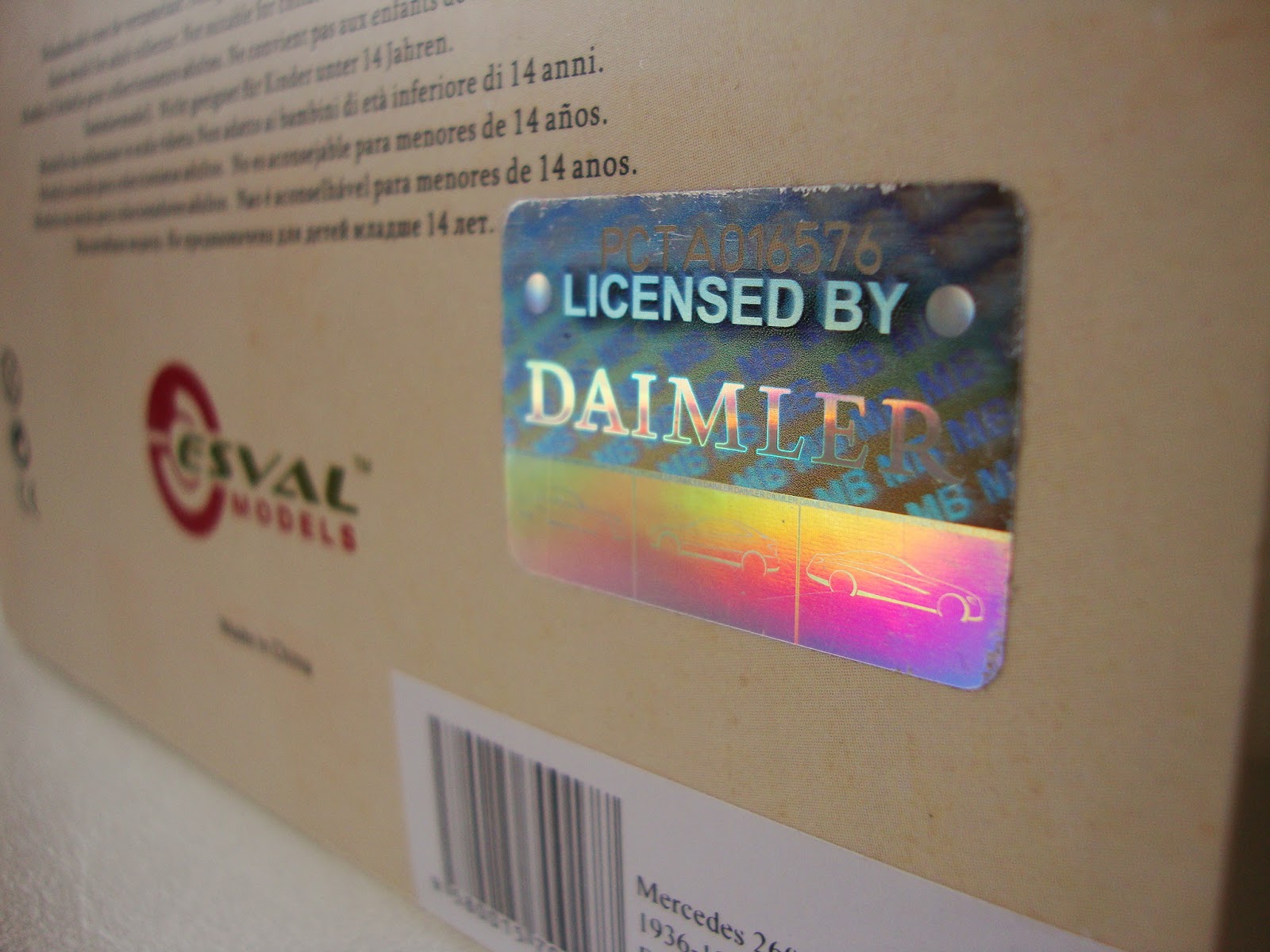 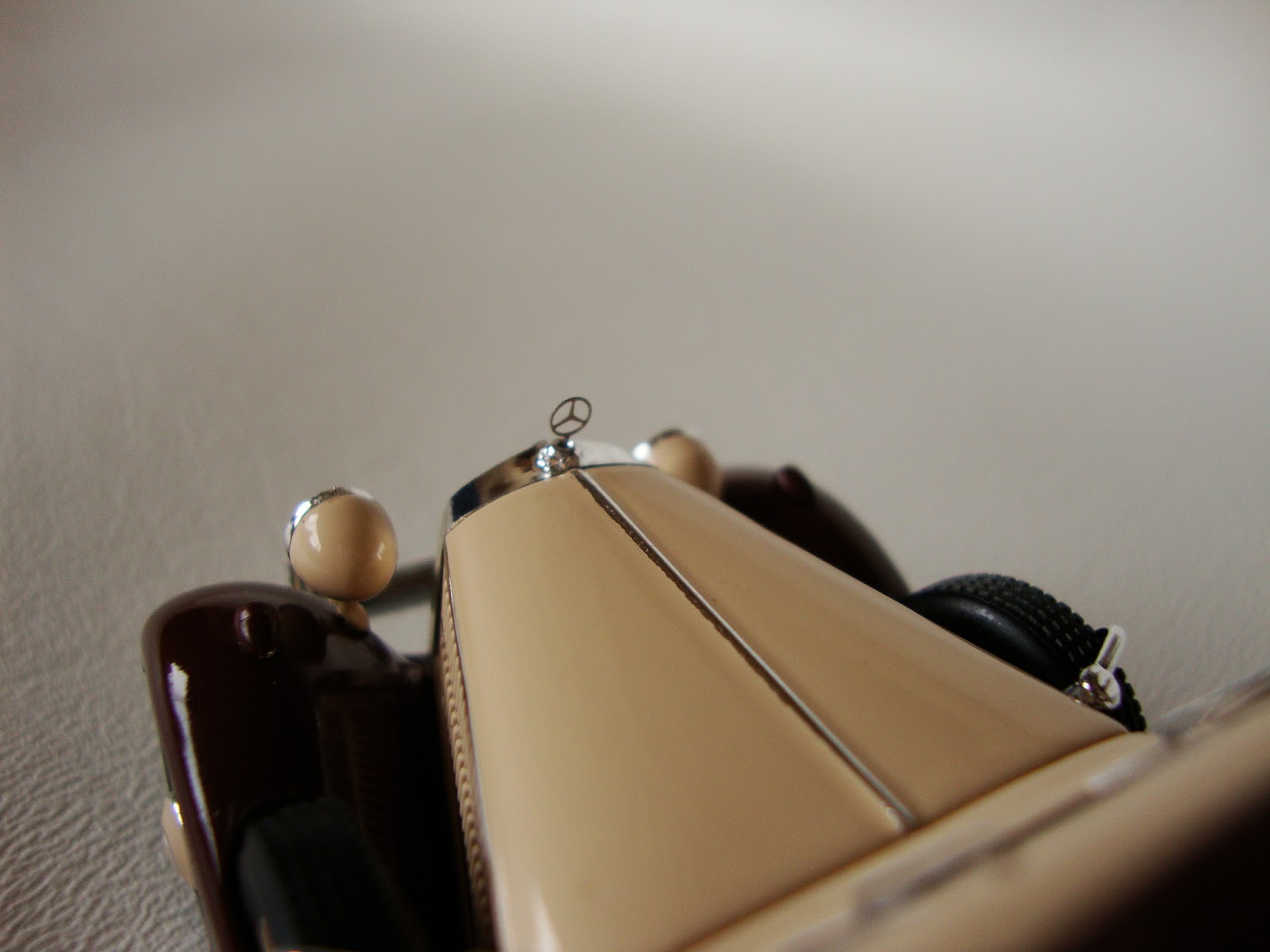 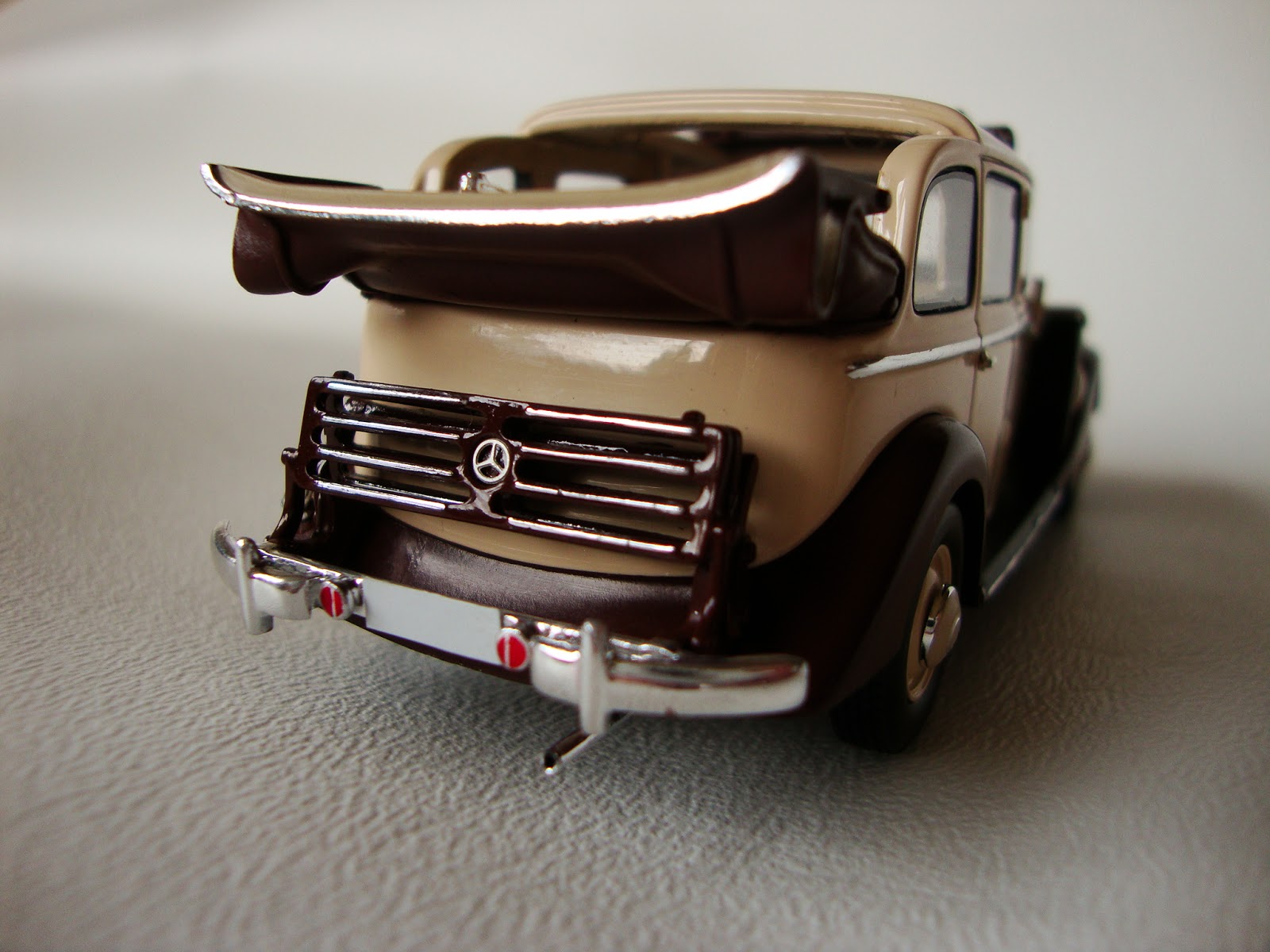 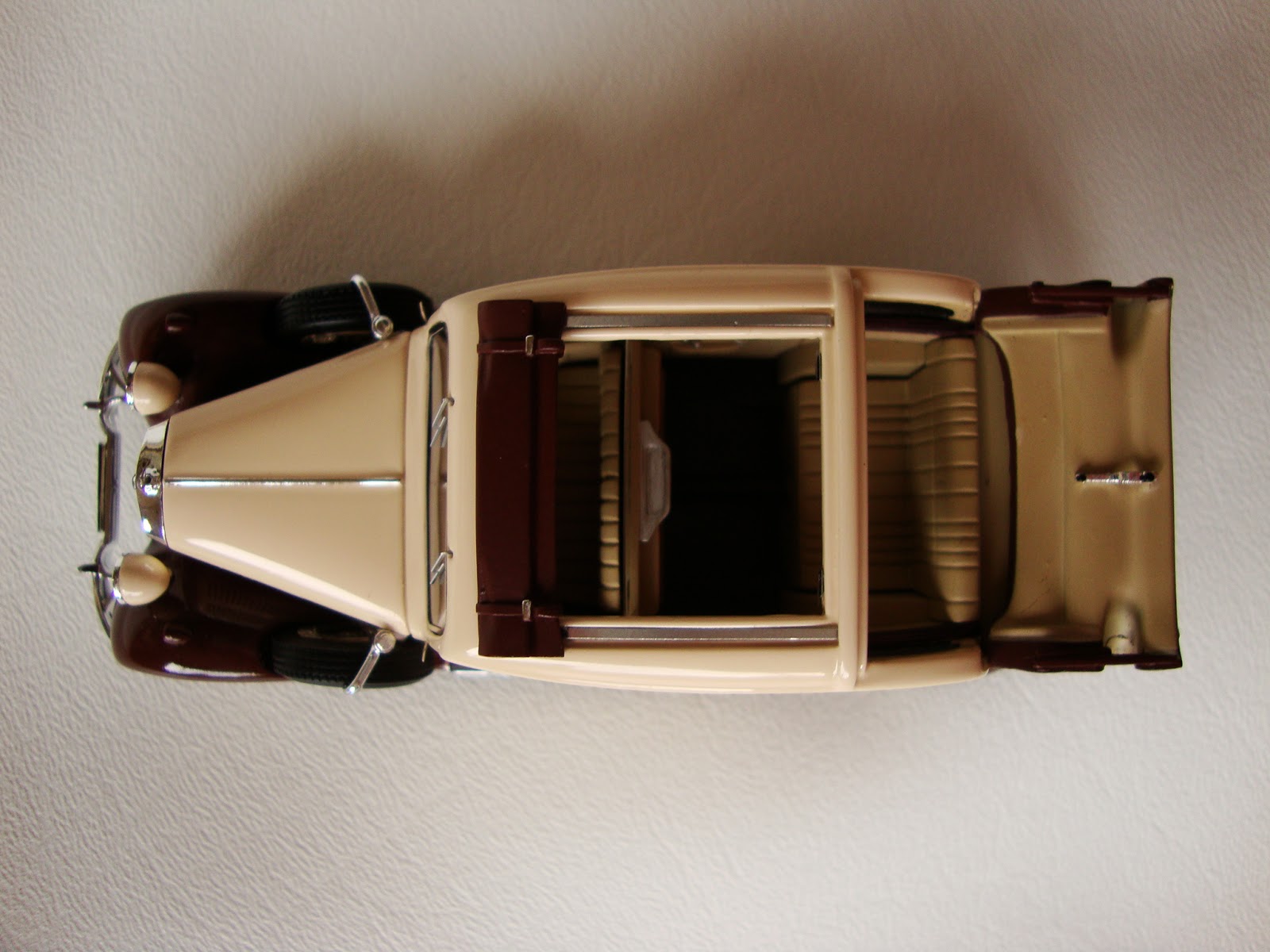 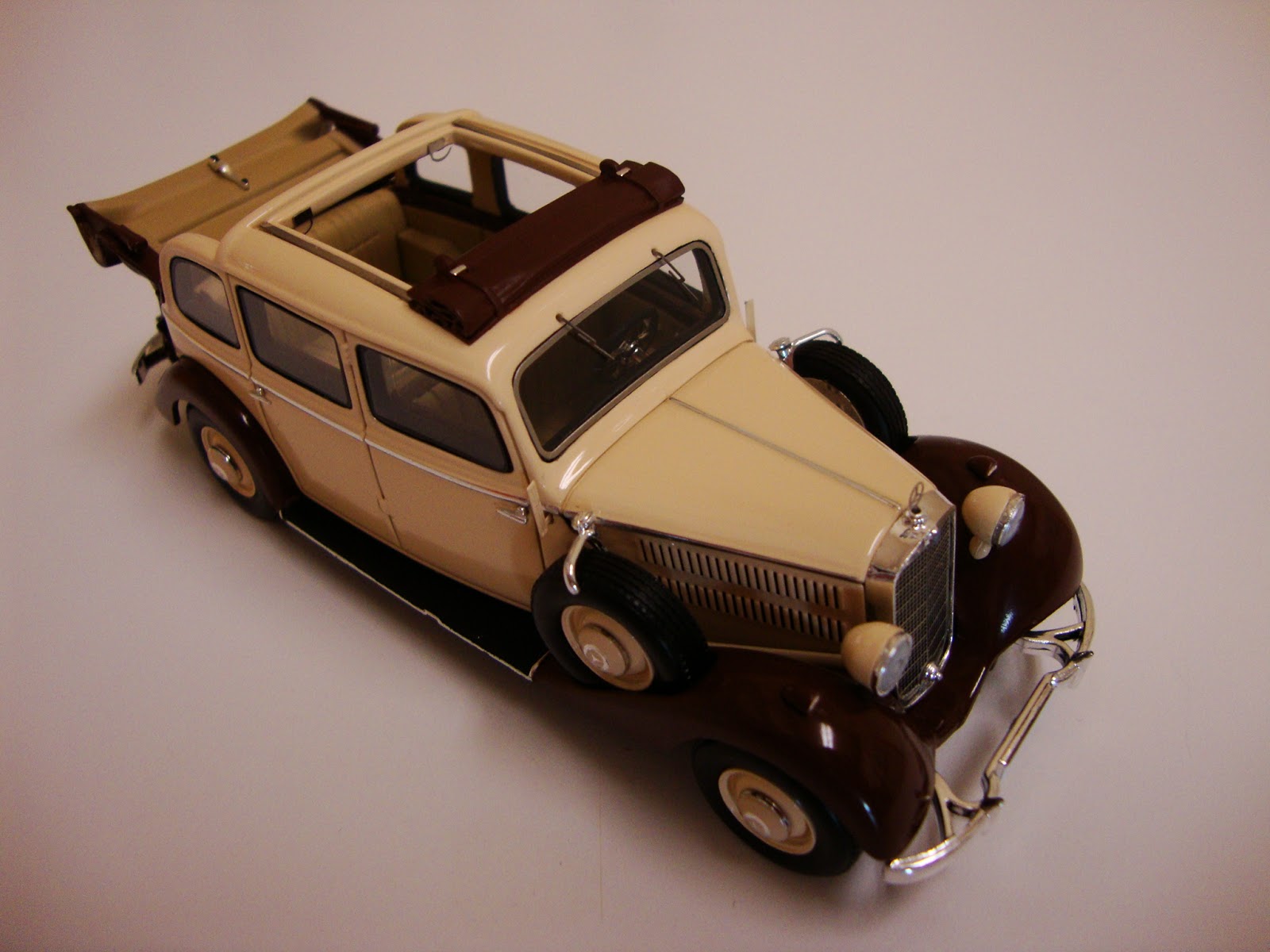 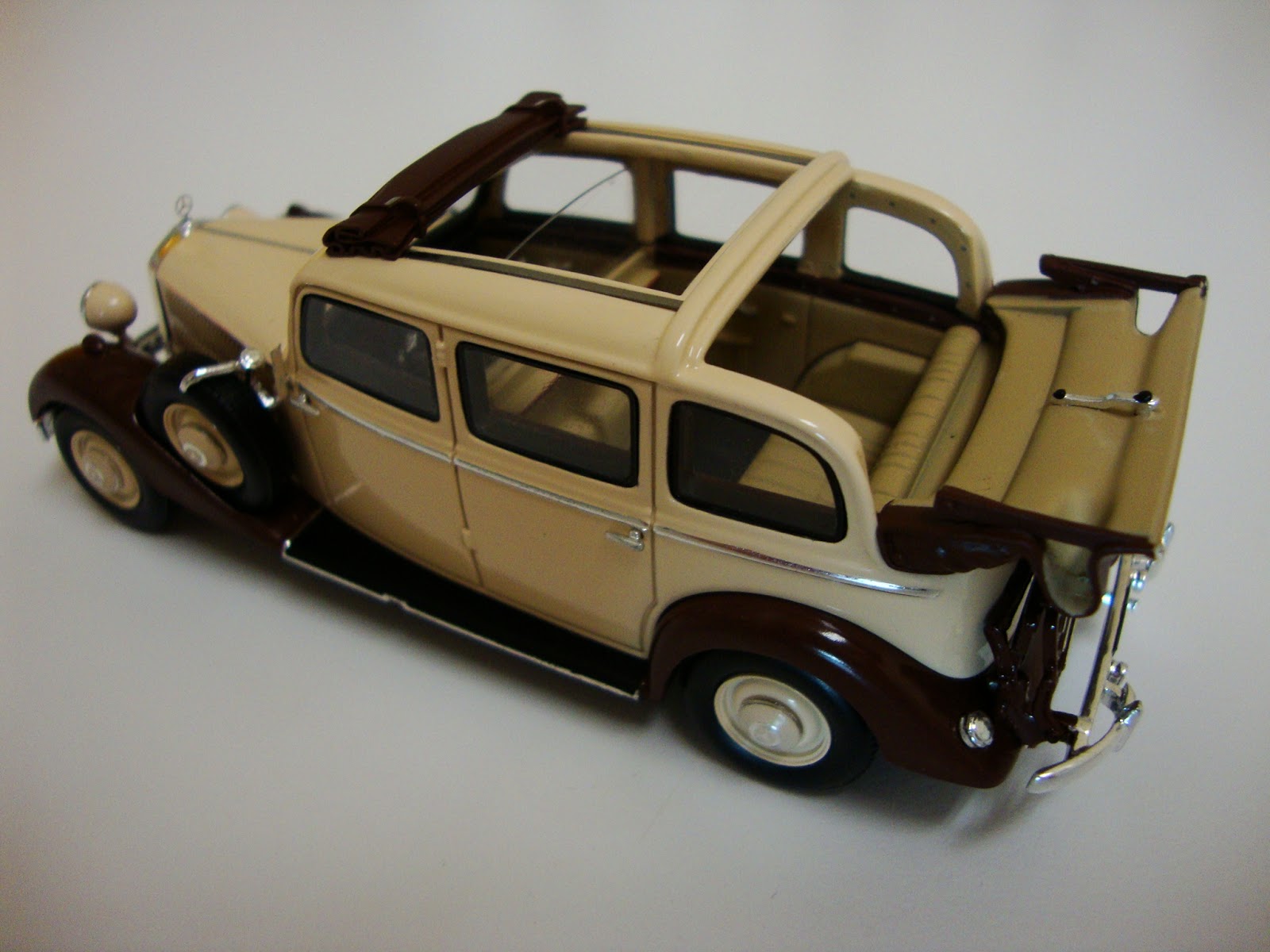 Message us for details: MotoArigato@gmail.com
© MotoArigato. Powered by Blogger.
Back To Top
Distributed By Blogger Templates | Designed By OddThemes